Take a bow you patrons of Paddy’s Pub, the team at your location has just set a landmark record in the history of television. On December 1st, after the airing of the first episode of its 15th season, It’s Always Sunny in Philadelphia set the record for the longest-running live-action sitcom in television history. The program which first aired all the way back in 2005 is an unlikely record-holder here considering the nature of its comedy. But here we are and to its credit, the show remains one of the funniest and most innovative out there. By staying relevant with its storylines and making some of the most oddball of choices in its writing, the show now is at the top of the television mountain.

NPR has it that It’s Always Sunny in Philadelphia bested the previous record-holder The Adventures of Ozzie & Harriet which had lasted 14 seasons on ABC in the 1950s and 1960s. Going by overall seasons on broadcast television, the FX comedy now has the title and could continue to add to it if they keep going with the show. Considering there seem to be no shortage of stories coming from the crew, and the fact that the cast has stayed so tight over the years, we could see a distancing on the television record when it is all said and done.

It’s Always Sunny in Philadelphia stars Rob McElhenney, Glenn Howerton, Charlie Day, Kaitlin Olson, and Danny DeVito as the owners and patrons of Paddy’s Pub in Philadelphia. It’s a ridiculous five-person operation with episodes typically revolving around the group getting drunk and trying to solve the world’s (or their own) problems which ends up in them only making things much, much worse. The narcissistic and debaucherous nature of their behavior is often the root of the comedy which has pushed the limits of network television.

The show was originally created and conceptualized by McElhenney who then brought on Howerton to help with putting it together. They then brought on Day and the three began producing demos with single episodes to send around to networks all the way back in the early 2000s. On a nothing budget, they were able to get FX to take on the show, and to say it was a home run is a complete understatement.

In addition to the 15 seasons of the show, It’s Always Sunny in Philadelphia was able to also take aspects of its story, specifically a certain episode, and turn it into an actual stage musical. It was called The Nightman Cometh and based itself on the actual play written in the show by the character of Charlie.

And if they are going for the all-time United States sitcom record, It’s Always Sunny in Philadelphia has a long way to go to catch The Simpsons. That classic series has now been on the air for 33 years and is still going relatively strong. It is hard to imagine that It’s Always Sunny makes it that far, but it’s almost inconceivable that they’ve made it this far, to begin with. Season 15 is set to run for at least eight episodes and will air through December 22nd. 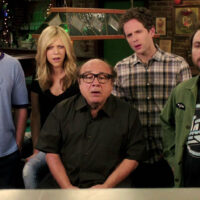