First Look At The New He-Man Series On Netflix

Much of the He-Man news of late has been focused on Sony’s efforts to reboot a live-action film for the franchise. Meanwhile, Kevin Smith has been working on Masters of the Universe: Revelation over at Netflix. He’s previously promised that it’s coming soon, and he wasn’t kidding. Today, Netflix Geeked shared ten new images and a release date for the beginning of the series. We can expect to see part one hit the streaming service on July 23, 2021. Until then, the new pictures tell us a lot.

Let’s first take a look at He-Man himself, with the Sword and ready to dive into battle.

Next up, let’s take a look at Skeletor, the villain from the series. If you’re familiar with the original 1980s cartoon, you’ll notice that he looks remarkably similar to how you remember him, except with crisper, fresher graphics. This master villain for the He-Man series will be voiced by the legendary Mark Hamill of Star Wars fame.

Meanwhile, his buddy Beast Man seems to have gotten a major update.

The next pictures are giving us a wide look at the cast. You’ll notice Orko hiding on the left in this wide shot.

The remaining pictures give us a better feel for the energy and characters for Netflix’s new He-Man.

Kevin Smith shared some behind-the-scenes details when he reshared the new Masters of the Universe: Revelation images on Instagram. He said that this new series is taking direct cues from the 1980s cartoon series, both in design and in story. This new animated series was designed by the same team that works on Castlevania, one Netflix’s biggest hits for adult-oriented animations. While the Castlevania references and the name Kevin Smith may sound like Revelation is going to be adult-oriented, Smith promises that this new He-Man series is going to be kid-friendly. He says that there should be elements adult fans of the original series will enjoy as well as newcomers and children.

Masters of the Universe: Revalation is going to be ten episodes long and released in two equal parts. There isn’t a release date for the second half yet, but the entire first five episodes will hit Netflix on that promised July 23rd date. The story for He-Man in this new series is going to pick up where the cartoon left off. After a major battle between He-Man and Skeletor, the characters will be at war for Eternia. Teela will be reuniting the heroes for the tale and they’ll be working together to find the missing Sword of Power and restore Eternia.

As mentioned above, Mark Hamill is voicing Skeletor. Actor Chris Wood, known for roles on Supergirl and a Jay and Silent Bob movie, is voicing He-Man. They’re being joined by Sarah Michelle Gellar as Teela, Kevin Michael Richardson as Beast Man, Lena Headey as Evil-Lyn, Justin Long as Roboto, Jason Mewes as Stinkor, Alicia Silverstone as Queen Marlena, and Griffin Newman as Orko. The new He-Man movie definitely has some well-known talent working to make this production happen. 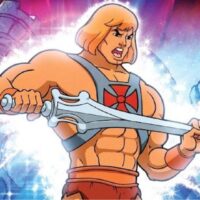