There has been such a massive shakeup at Warner Bros in the wake of the merger with Discovery that it’s been a bit tough to keep up with all of the changes that have happened already. And there are even more to come with this newly formed company. One of the pieces that has been in great flux over the last few months has been the fate of HBO Max and the offerings that have been and were supposed to be on the streamer. While it’s still not totally understood what is going to stay and what is going to go, we do know that for the time being it’s at least going to be cheaper to watch. Deadline has it that HBO Max is offering some pretty massive price cuts for the service if new and existing customers are willing to lock in for a longer subscription period.

According to the Deadline reporting, the new prices for those signing up for a full-year HBO Max plan before October 30th will get a bill for 104.99 ($8.75 / per month) if opting for the ad-free version. If going full-year but with the ads, then the price is going to be $69.99 ($5.83/ month) for the year. Compare that to the previous prices of $149.99 and $99.99 respectively and users are looking at savings of more than 40% over the course of the year. That represents a pretty huge HBO Max savings coming from the streamer, and this is all in line with new offerings on the way and the hope that they can retain some of their subscriber base in the wake of their recent shakeups.

Another piece of this coming from Deadline is that the timing of this HBO Max price cut comes at a time of uncertainty for the platform but also when they have one of their biggest offerings about the hit the streamer this week. That’s going to be House of the Dragon, the Game of Thrones spinoff which is gearing up for a massive audience. Based on the overwhelming popularity of the original series and the cost that’s gone into this new production (an estimated $20 million dollars per episode), the expectations are pretty high here. And the price cut times out well with trying to ensure viewers get into this series early and often.

The expectation is that HBO Max will eventually merge with Discovery+ after the Warner Media merger and a good number of programs on the streamer already have faced the firing line. There are others likely to get the ax sooner than later as well. It’s part of the company’s move away from scripted programming as part of the core business model and they will lean into Discovery’s current offerings while sticking with the HBO tentpole offerings (like the Game of Thrones franchise).

Again, Warner is making major moves here, some that fans aren’t all that into. The biggest one was the canceling of Batgirl despite having already sunk about $100 million into the flick and having also completed it. It marked the biggest cancellation of a movie like this ever. And other smaller HBO Max DC projects as well as scripted shows have already been told they won’t be coming back. At least now subscribers can get it all cheaper for the next year. 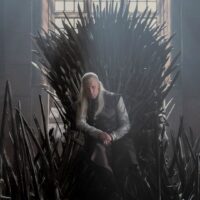