When Marvel Studios announced Phase 4 of their universe, there were a couple things of note. Absent was the big Avengers-type movie. Gone is the team-up movie and in its place are a bunch of solo movies. Another, perhaps more telling, change is that a lot of Phase 4 will be seen on the small screen. Disney+ will be handling Marvel’s small screen adventures and fans are licking their chops for the premiere of the first series, The Falcon and the Winter Soldier.

We have some time before the show’s first episode premieres but slowly details have been leaking out about what Marvel has planned. Here’s everything we know about The Falcon and The Winter Soldier… so far.

Anthony Mackie returns as the Falcon. The big question is: what will he be wearing? The last time we saw Sam Wilson it was at the end of Avengers: Endgame and he was having a conversation with an aged Captain America. It was during this conversation that Cap presented Sam with his shield. Sam was reluctant at first but ultimately accepted the honor. So, is Sam the new Captain America? Or will he still be the Falcon?

If we’re going by looks, the first poster (above) released shows Sam Wilson wearing a whole bunch of red, white and blue. Is that a shield on his back? You can see Falcon flying in the background, but he is flying through something which looks a lot like Captain America’s shield. Interesting.

Disney+ also fueled the fire by releasing the concept art of Mackie in his new costume (pictured above). This view from the front shows Mackie outfitted like Falcon but with red, white and blue colors.

AND THE WINTER SOLDIER

Sebastian Stan is back to reprise his role as the Winter Soldier, Bucky Barnes. Also seen last in Avengers: Endgame, Bucky was part of that final conversation between Captain America and Sam. It was with Bucky’s urging that Sam reluctantly took the shield. What is Bucky’s role as the series debuts?

What we do know is this: Bucky will be dealing with the fall out of not having his best buddy, Steve Rogers. Bucky and Sam have a long road ahead of them. Someone has to fill Captain America’s shoes.

As with Mackie’s Falcon, the Winter Soldier will also be sporting some new duds. The official concept art above shows Bucky in a suit honoring Cap.

After the exciting announcement that Mackie and Stan were reprising their roles, the next question was who’d be joining them? It didn’t take long for Marvel president Kevin Feige to drop those bombshells.

During the San Diego Comic-Con, Feige announced that Baron Helmut Zemo, Daniel Brühl, would be back as the main baddie. Zemo, if you recall, was the mastermind terrorist who caused the rift between Captain America and Iron Man in Captain America: Civil War.

Later, at the D23 Expo, Feige was on hand to announce that Emily VanCamp will also be back as SHIELD Agent Sharon Carter, grandniece of Peggy Carter. VanCamp, like Brühl, made her presence felt in Civil War.

But Feige wasn’t done with cast announcements. Last but not least, Feige brought out Wyatt Russell (Overlord) and told the audience that he will be portraying John Walker. This character may or may not be familiar to some. In the comics, John Walker was the superhero Super-Patriot (now known as U.S. Agent), a version of Captain America who doesn’t mind getting his hands dirty. It will be interesting to see what role Super-Patriot/U.S. Agent takes because in the comics he was at constant opposition to Captain America. With Cap no longer in the picture, we can only speculate how Falcon and the Winter Soldier will deal with him.

At the moment there is no specific release date for the series. Disney+ has only offered a Fall 2020 timeframe, so look for The Falcon and the Winter Soldier to premiere sometime in September of next year.

Yes, it’s a long wait but it’s going to be worth it. For those interested, Disney+ put out a 12-minute teaser, Expanding the Universe, that speaks not only of this show but what Marvel has in store for its fans on Disney+.

Falcon And The Winter Soldier’s Story

The details of the plot are shrouded in mystery. What we know for sure is that the series will be comprised of six one-hour episodes. There is no further commitment at this time. The six episodes will not be released all at once, sorry bingers, but as they’ve done with The Mandalorian, episodes will be released weekly.

The story is set in the aftermath of Endgame and Captain America handing his shield to Stan. Moving forward will be tough for both Stan and Bucky. Given six episodes we are sure to see the series dig deep into both of these characters. As for the Baron, when he was seen in Civil War, it was noticed that he didn’t have his traditional comic book look. Well back in July, Brühl posted a couple of pictures of himself wearing an outfit and mask reminiscent to the one he wore in the comics.

The big unknown is John Walker’s presence. What he’s known for in the comics may not hold true in the series. Concept art, though, may give us an indication that The Falcon and the Winter Soldier is going to follow the comics more closely. The concept poster for John Walker shows him dressed in a similar costume as Captain America. This fits the comic’s Super Patriot narrative.

With the series scheduled for only six episodes, Emmy nominated Kari Skogland (Handmaid’s Tale, Nos4A2) has been tabbed to direct each entry. When asked about the series only being six episodes, Skogland offered this to TV Guide, “I think anything with Marvel, they take it a piece at a time. And they are very story focused. So if it makes sense for a story, they will do it, and if not, they won’t,” said Skogland. “I have no idea what will be next, and I’m sure they would probably say the same thing. It’s like, we’re really working on this right now, with an all-hands-on-deck effort to make it the best it can possibly be. And then of course I hope [we can do more], but [there’s] no word.” Regardless, the series should be in great hands with Skogland.

Malcolm Spellman (Empire) was hired to write The Falcon and The Winter Soldier and offered his take on what the tone of the show might be. He compared it to movies like Lethal Weapon, 48 Hrs, Bad Boys and even Beverly Hills Cop. He told TV Guide, “All those great two-handers, we literally posted them up on the wall. They all come into a funnel, and probably Lethal Weapon is the closest.”

During a Disney+ panel, it was said that the costume Sam Wilson is wearing in the poster is linked to a storyline in the comics. After Steve Rogers’ death, Sam must fight for the title of Captain America. What makes this idea more real is the hiring of Wyatt Russell to portray U.S. Agent. This storyline would fit perfect in a six-episode arc.

Bucky Barnes and his new outfit: While it looks similar to his Avengers: Infinity War costume, it also bears a resemblance to his 1940’s Howling Commandos uni. It will be interesting to see the real deal and how close it comes to the concept art.

Bad news ladies, hope you’re sitting for this. Bucky cuts his locks off. Again, if concept art holds true, Bucky goes back to the clipped look of his military days. Mackie and Stan were in an interview with TV Guide and Mackie offered this observation, “We had to cut it,” Mackie joked. “No respectable man wears that hair.” Seems he could be telling the truth, director Skogland also told TV Guide, “Expect the unexpected, that’s all I can say.” Sad times ahead.

Could there be a new Bucky on the horizon? Those of you who know the Captain America comics may recognize the name Lemar Hoskins. He became the Super-Patriot’s right-hand man and was one of the five Bold Urban Commando’s (BUCy’s). When Super-Patriot took over for Captain America, he brought Lemar with him. The reason for this explanation is because while filming the series in Atlanta, Georgia, a fan noticed a mock storefront that was labeled Hoskins Family Flowers Shop. This could indicate that Super-Patriot may be taking on another version of Bucky.

Is the real Cap coming back? Last we saw of Steve Rogers he was a very old and very happy man. He got to live the life he wanted with the woman he loved. So, how far in the future does The Falcon and The Winter Soldier take place? That question is still up for debate but Captain America himself recently updated his Captain America status.

Chris Evans was on ET and when pressed about this, his answer didn’t quite slam the door closed on Cap. “There were a million ways my tenure with Marvel could have gone wrong and it didn’t, so to stick the landing so well, it would be a shame to kind of revisit unless there was something unique that we felt the need to reveal. For now, it just feels like, ‘Let’s be content with how well it ended.’”

The clues are all there if one wanted to bet on Sam Wilson actually becoming Captain America. The simplest way to know, though, is to look at the title of the series. The title says it all: THE FALCON and the Winter Soldier. Look for the series to premiere on Disney+ in Fall of 2020. 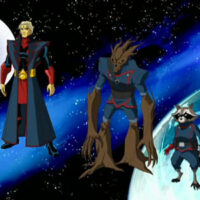