Dwayne Johnson knows a thing or two about bringing people hits on the biggest stages. The dude is just turning out blockbusters without seeming to break all that much of a sweat and has become one of the biggest stars we have right now in the movie industry, or really the world. And this weekend Dwayne Johnson teased that he has another project about to hit the screen on one of the most-watched programs of the entire year. He took to Instagram to let on that he had filmed something exclusively for the Super Bowl which is airing in a couple of weeks.

In his Instagram post, Dwayne Johnson didn’t let on what exactly he and his team had but together for the big game. Typically with this broadcast, the highly-anticipated pieces outside of the action on the field are the commercials. But from the way that Johnson described it, even in broad terms, this didn’t seem to be what he was talking about. Instead, he more talks about the motivational piece behind the sport and how he never reached his dream to make it in the NFL. Check out what Dwayne Johnson teased for what could be in store.

So it isn’t quite clear what Dwayne Johnson has in store for Super Bowl Sunday. It sure seems like it is something that exists outside the realm of a commercial or the often-hyped halftime show. Maybe it will be something of the motivational sort, put out there by the league itself. That all remains to be seen but is just another reason to tune into the game. Last year’s game was watched by a whopping 96.4 viewers, the most-tuned-into broadcast of 2021.

In addition to this planned Super Bowl project, Dwayne Johnson has plenty more coming this year and beyond on the big screen. For starters, there is Black Adam which will officially bring him into the DC Extended Universe. By all early accounts, this movie is set to a pretty grim and violent take on the character, even starting him off as something of a villain when the film gets underway. His character looks like he has powers comparable to Superman, and doesn’t hesitate to use them on lowly humans if need be. But eventually, his character will join up with the Justice Society of America and turn a bit more anti-hero than anything else.

And he has plenty of other projects in the works as well. There is an updated version of Doc Savage, another action movie, this one alongside Chris Evans in Red One, and the sequel San Andreas 2. And that’s not all because there is also a remake of Big Trouble in Little China and The King which is being directed by Robert Zemeckis.

All of this follows another Dwayne Johnson blockbuster from this past fall. That was Red Notice on Netflix. In it, Johnson stars alongside Ryan Reynolds and Gal Gadot in a game a thief cat and mouse. The flick became the most-watched movie on the platform for its 28 days. It is looking more and more like there will be a sequel on the streamer. So it’s all huge things for Dwayne Johnson right now, and we’ll soon be able to catch him when the Super Bowl airs on Sunday, February 13th. 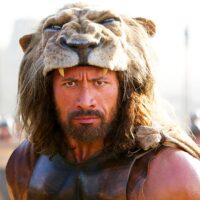