Dwayne Johnson has a lot on his plate right now thanks to Black Adam, Red Notice and, apparently, a budding rap career. However, that doesn’t mean he’s abandoned one of his most beloved characters — Lucas Hobbs. The 2019 film Fast & Furious Presents: Hobbs & Shaw was an odd entry in the ever-growing Fast and the Furious franchise. Dwayne Johnson’s character spun-off alongside Jason Statham’s Deckard Shaw in a standalone adventure that didn’t include the rest of Dominic Toretto’s infamous “family.” Oh, and it also introduced Idris Elba’s Brixton Lore as a literal freaking cyborg.

Since then, news on a sequel has been pretty quiet as Dwayne Johnson seemingly moves on to other projects and franchises like Jungle Cruise and the world of superheroes. However, in August, Fast and the Furious franchise producer Hiram Garcia told Collider that a sequel is definitely happening. But it all hinges on finding a worthwhile story that will fit into the Fast universe alongside planned tenth and eleventh installments in the flagship storyline starring Vin Diesel.

Well, speaking on SiriusXM’s The Jess Cagle Show, Dwayne Johnson implied that he has found that worthwhile story. However, he says the beauty of it is that it doesn’t quite fit into the rest of the universe. He noted that, because he’s so busy, he needs any project to have “The Moses Effect” which parts all the other projects like the Red Sea. He said he recently had an idea for the sequel that made him think it had “Moses Effect” potential. He said he called Donna Langley, writer Chris Morgan and Garcia and pitched something he calls the “antithesis” of a Fast and the Furious movie in that it does not seek to grow and go on and on. He says he wants to tell a story that sees a man “walk off into the sunset.”

Could Dwayne Johnson be teasing the end of Lucas Hobbs? Is he planning to break from the rest of the films and actually scale back a franchise that recently took a car into outer space? These are all worthwhile questions to which the answer “yes” would be a reasonable answer.

As those who have been paying close attention to the franchise know, Dwayne Johnson has been at odds with franchise boss Vin Diesel. During the production on F8 of the Furious, the duo (starting with Dwayne Johnson) started a bit of a subtle war of words on social media. Johnson took to Instagram to criticize the conduct of a co-star largely thought to be Vin Diesel, who Empire notes later said he had to issue some “tough love” on Dwayne Johnson. Whatever middle ground the truth lies in, the fact of the matter is that Lucas Hobbs was absent from F9 and will not be around for the tenth and eleventh installment in the franchise either.

So, that just leaves room for Dwayne Johnson’s Lucas Hobbs in another Hobbs and Shaw movie. Meanwhile, poor Jason Statham is stuck in the middle of this whole thing. While he would likely be on board to make a sequel to the spinoff, he was teased in the end credits of F9 meaning he may also be a member of Team Diesel. Only time will tell. 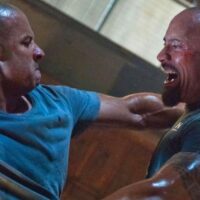