It’s that magical time of year where Doctor Who promises a special event. For 2022, they’ll again begin the year with the threat of Daleks. The new episode, Eve of the Daleks, has released its brief first look trailer. It shows off Aisling Bea and Adjani Salmon as guest stars who start off seeming to flirt with a little romance, only to meet up with Daleks, The Doctor, and her companions.

See the Eve of the Daleks trailer below.

The new Doctor Who trailer is brief, but it teases a few important things for fans. One of them is a Grounndhog Day like story as the characters seem to be on repeat. Another is that a lot of Daleks are on the way. This is something that showrunner Chris Chibnall has embraced in his previous specials for the new year. In the 2019 and 2021 specials for Jodie Whittaker the story saw her facing off against Daleks in the episodes Resolutions and Revolutions of the Daleks. This third take seems like a fitting way to complete his work on the show.

The trailer gives only a brief look at the episode. However, the poster for the new episode and Chris Chibnall himself give a little more information on what to expect. Here’s what the Doctor Who showrunner had to say about the episode.

We all need a little romance in our lives around New Year. Less so, Daleks. But Aisling Bea and Adjani Salmon’s characters will have to deal with both in a New Year’s Eve from hell. Together with Jodie Whittaker’s Doctor, it’ll hopefully prove the perfect New Year’s Day tonic.

As for the official poster, the biggest reveal is whatever is happening in the Tardis in this photo. Take a closer look at the cracks and lines in the Tardis. That could be just special effects to match up with the fireworks for the holiday, but it seems more likely that it’s hinting at something for the episode’s story. The poster also shows the characters, the Daleks, and the episode’s premiere date.

Hopefully, the new special will be something fans can appreciate, particularly since it marks the beginning of the end for Jodie Whittaker’s Doctor. Doctor Who has been suffering from poor ratings as its most recent season comes to a close. The franchise is making big changes as they move ahead. Soon, Jodie Whittaker will appear as The Doctor for the last time. The character will regenerate for season 14 with an actor yet to be announced. Chris Chibnall, the current showrunner, will also be making his exit as former showrunner Russell T Davies makes his return.

For right now, fans can only guess at what all these changes may mean for future seasons of Doctor Who. Fans have said that when Russell T Davies took over as showrunner in 2005 that his work marked the start of a revival for the franchise. Hopefully, fans will see a satisfying ending for Jodie Whittaker’s Doctor in 2022 and an exciting start for the next actor in the role. 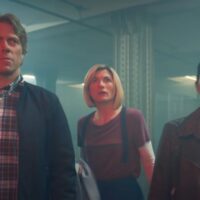