One of the most shocking elements of Doctor Strange in the Multiverse of Madness were the cameos that took place when Doctor Strange came into contact with The Illuminati. If you have not seen Doctor Strange 2, quit reading immediately. The moment when The Illuminati came in held some of the best cameos of any MCU entry, which featured John Krasinski as Reed Richards, Hayley Atwell as Captain Carter, Anson Mount as Black Bolt, Lashana Lynch as Captain Marvel, and Sir Patrick Stewart as Professor Xavier. Fans erupted in the theater for this huge moment, only to follow that with deep gasps as the Scarlett Witch murdered everyone quite brutally. However, a fan has now seen fit to redo this moment with Deadpool saving the day. You can see the video below:

Although the above video is only a minute long, and the battle ends quite fast, we are still treated to some sweet vengeance. Deadpool is transported into Earth-838 and immediately quips about being in trouble. He then casually sneaks his way into the room where Scarlett Witch is about to brutally kill everyone, and he simply slices off her head. That is very on-par for the character and something that he would likely do had he been invited into the MCU officially. We are all patiently waiting to see Deadpool appear, though we might have to wait until the third movie comes out, which is 100% in the MCU.

Fans had long been clamoring to see Deadpool appear in Doctor Strange 2, and it had been a strong rumor that he might have shown up in The Illuminati scene as a prisoner of some sort. Imagine Doctor Strange and America Chavez looking over and seeing Deadpool locked in another cake alongside them. That would have been enough for fans to go wild, especially considering the massive cameos that took place moments later in that scene. Unfortunately, we did not see the Merc with the Mouth in this MCU entry. He might appear before his long-awaited return, but we would bet on the man just getting in some great cameos when Deadpool 3 comes out.

Deadpool 3 is currently being worked on with Paul Wernick and Rhett Reese returning to write the film, as they have both worked on the previous two entries. Also, Ryan Reynolds will be reunited with director Shawn Levy, who directed The Adam Project and Free Guy. Reese and Wernick had also stated that Disney was giving them free rein to joke like they normally do, which is odd considering how strict Disney is on their “squeaky-clean” image. Either way, expect some huge cameos in that film.

Though we didn’t get to see Deadpool in Doctor Strange 2, we can all watch the above video and replay it several times over to see Marvel’s most hilarious assassin dispatch Scarlett Witch with ease. That moment would have been great if it were real. Deadpool sneaks in and cuts her head off and just stares at the shocked members of The Illuminati. We hope his newest entry is as brutal as its predecessor and definitely as brutal as the above fan-made video. 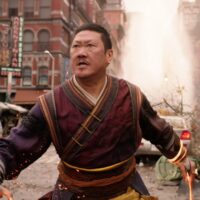