There are a lot of ambitious actors in Hollywood, but when it comes to knowing exactly what he wants Dave Bautista tops the list. It’s no secret that the Guardians of the Galaxy star has always wanted to develop a live-action Gears of War movie. But no one could have predicted just how far he would go to get the idea greenlit. In fact, according to We Got This Covered, he is still really pushing for the role.

In an interview with Collider earlier this year, Dave Bautista said he actually turned down a role in one of the Fast & The Furious movies to promote Gears of War. He explained that during a meeting with Warner Bros., executives wanted to talk to him about Fast & the Furious, but he told them that he wasn’t interested.

According to Dave Bautista, the movie bosses were “a little put off” by his dismissal of the other role, explaining that it was never his intention to offend anybody. He stressed that he simply finds Gears of War more interesting, and he can’t pretend that he’s interested in something that he’s not. All the actor wants is for them to take a chance on him and his ideas since he’s very passionate about them and believes he can do a good job as Marcus Fenix, the game’s lead character. It doesn’t hurt that the two look alike as well.

The former professional wrestler got his big break when he landed the role of a lifetime as Drax the Destroyer in Marvel’s Guardians of the Galaxy movies. And he’s accumulated a pretty impressive bunch of film credits ever since. Dave Bautista’s most recent movie success includes a starring role in Zack Snyder’s Army of the Dead. The movie garnered 72 million viewers over its first four weeks on Netflix, while earning US$1 million at the box office. With a couple of movies in post-production, the actor is ready to step into the spotlight with roles that place him solidly in the lead.

Meanwhile, Dave Bautista will portray Glossu Rabban in Denis Villeneuve directed sci-fi film Dune. The movie is the first of a planned two-part adaptation of the 1965 novel of the same name by Frank Herbert, which will cover roughly the first half of the book. Dune will premiere at the 78th Venice International Film Festival, followed by a 3D theatrical release in the United States on October 22nd.

Bautista will also be reprising his role as Drax the Destroyer for an appearance in Marvel Cinematic Universe’s next Asgardian offering Thor: Love and Thunder. He will also return in Guardians of the Galaxy Vol. 3 with James Gunn writing and directing the project. Additionally, Drax and the other Guardians of the Galaxy characters will be featured in a holiday special created by Gunn for HBO Max.

Dave Bautista will also be reuniting with Spectre co-star Daniel Craig for the sequel to Netflix’s Knives Out. Production began this June in Greece with cinematographer Steve Yedlin and concluded in July. Principal photography is halfway complete, with the final parts of filming set to take place outside Greece. 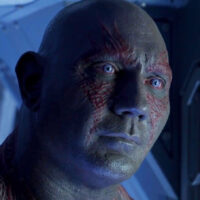