Netflix’s Cowboy Bebop live-action adaptation is one of the more exciting and anticipated programs to come to the streamer in some time. From the early looks of things, John Cho, Mustafa Shakir, and Daniella Pineda look every bit the bounty hunters we got in the original animated series with the show looking incredibly slick, the characters and world look fully brought to life. And in some of the recently-released posters, we get an even more up-close look at the cast of characters.

The new Cowboy Bebop posters go character-by-character getting up close and personal with the cast. What’s pretty amazing is that even with the dialed-in shots that don’t leave space beyond just faces, there is still so much personality here. It’s almost a testament to how much care they’ve put into things for the show. Let’s take a look at some of these new posters and you can see what I mean.

For starters, we get the three main characters of the Cowboy Bebop series. There’s John Cho playing the lead, Spike Spiegel a bounty hunter who is trying to (kind of) reform out of a life of gang-riddle crime. Early scenes from the show and teasers have shown him very much with a devil-may-care attitude and he embodies everything we’ve seen from the original anime series. Then there is Shakir as Jet Black. The signature beard and right eye scar are on full display. And finally, there’s Pineda as Faye Valentine. She’s been altered some from the original character, but in a good, more realistic way.

But the posters for Cowboy Bebop don’t stop there. They’ve included other folks central to the series story. There is Elena Satina’s Julia who ends up becoming a love interest for Spike, caught in between a couple of different worlds that are decidedly at odds with each other. The character is both alluring and mysterious, something that clearly comes across here. And we also get Alex Hassell’s Vicious, Spike’s antagonist. The two definitely have a past and one can tell from this poster that the dude embodies the name.

Finally, how could we forget the Welsh corgi Ein who has been a part of some of the early promotional pieces of Cowboy Bebop? Even he gets his own look with the simple word “Bark” to juxtapose Spike’s “Bang”.

Cowboy Bebop is the live-action adaptation of the popular anime series that ran in the late-90s. It is set to hit the streamer on November 19th of this year. From all the early looks, we could have a real hit on our hands with the show clearly motivated to have the feel and style of the original come through in this remake. The set pieces look sweeping, the music has the jazzy, mood-setting undertones and the styles clearly carry over from the anime feature with their own spin put in. Frankly, it looks great and these posters are just another example. It won’t be long before we are flying through the solar system along with this band of misfits and neer-do-wells. 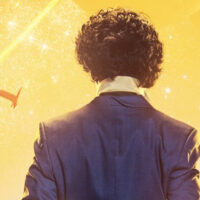 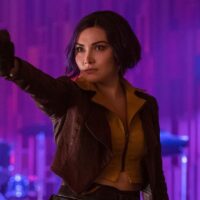