With the original group of Avengers slowly making their way out of the Marvel Cinematic Universe, it’s only a matter of time before we bid adieu to everyone, paving way for a new group of younger stars to take on the mantle. The next one to go could be Chris Hemsworth who is set to star in his fourth solo movie in the MCU space when Thor: Love and Thunder comes out this summer. And it’s starting to look like this will be Hemsworth’s last turn as the character in the MCU with the actor suggesting that he’s done what he wanted to do with Thor and this could be his final story. If it’s the case then he’s given us one of the truly memorable performances within this studio, basically transforming the character into one of the most fun ones around.

Chris Hemsworth was doing an interview with Wired and hinted that Thor: Love and Thunder would be his last go-around in the Marvel Cinematic Universe. While he didn’t expressly state it, there was a certain finality to his comments and he did speak about his playing Thor more in the past tense. Again, this isn’t official, and things with the world of comic book movies can pivot quickly, but it wouldn’t be all that much of a shock if this movie was Hemsworth’s last.

And the way they are setting things up, especially considering who’s involved, it would make total sense for this to be the last rodeo. While doing Wired’s Web’s Most Searched Questions, Chris Hemsworth, when referring to Thor: Love and Thunder said, “…it may be my last, I don’t know. It was a wild and fun and wacky experience…” You can check out the whole interview below:

Even if this wasn’t Chris Hemsworth’s last movie for Marvel, it would appear that from this answer there are at least no immediate or pressing plans to rejoin the franchise as Thor anytime soon. And considering the nature of this final movie, with everyone involved, wouldn’t it be the perfect sendoff for our favorite Asgardian? It sure looks like director and writer Taika Waititi wanted to bring together all aspects of the Thor story throughout the character’s run into one big romp through space as the character looks to get his hammer-wielding mojo back.

In addition to Chris Hemsworth, Thor: Love and Thunder will feature all sorts of characters who’ve had a place in this franchise before. Tessa Thompson returns as Valkyrie, and Korg will be back as well. Plus, the Guardians of the Galaxy are in the mix with Chris Pratt, Karen Gillian, Dave Bautista, and Pom Klementieff all having parts. Last we saw Thor he was taking to space with the Asgardians of the Galaxy as he affectionally referred to them. And picking up the hammer as well will be Natalie Portman who returns as Jane Foster, transforming into Mighty Thor for this one. Finally, Russell Crowe is on as Zeus and Christian Bale will play the film’s big bad, Gorr the God Butcher.

If this was going to be Chris Hemsworth’s last ride for Marvel, it’s for sure been a good one, and this last movie looks like it could be among the best ones yet. 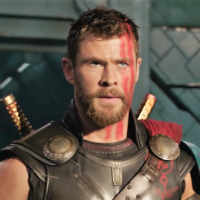