Ashley Judd was destined for fame from the day she was born. As the daughter of country music star Naomi Judd, and the half-sister of country music singer Wynonna Judd, she grew up surrounded by the bright lights of superstardom. Her impressive acting career has spanned over three decades with roles in several successful movies like 1996’s A Time to Kill, Kiss the Girls in 1997, Double Jeopardy in 1999, and 2002’s Divine Secrets of the YaYa Sisterhood.

But no matter how famous your family may be, everyone has to start somewhere. For the Someone Like You star, this big break came by way of a non-concurrent two-episode appearance on 1991’s Star Trek Next Generation. The first was an episode called Darmok, where the Enterprise makes contact with a Tamarian ship orbiting the planet El-Adrel. Because the role was so small, the call sheet referred to an “uncast actress” in the role of Lt. Larson. But in the final episode, the character became Ensign Robin Lefler – who was played by Ashley Judd.

Ashley Judd later reprised her role as the character in an episode of Star Trek Next Generation called The Game. This time her character had a bigger part to play in the story, which saw William Riker get introduced to a video game by his love interest Etana Jol. After he distributes replicated copies of the game to the crew of the Enterprise, Wesley tells Captain Jean-Luc Picard that the game is dangerous. When the Captain is compromised, Wesley and his new girlfriend, Ensign Robin Lefler realize they are the only people who are not addicted to the game.

Following her work on Star Trek Next Generation, Ashley Judd secured a recurring role in the family drama series Sisters. Created by Ron Cowen and Daniel Lipman, the series aired on NBC for six seasons from May 1991 to May 1996. The 54-year-old actress joined the cast in the second season as Reed Halsey and left the series after the fourth season. She went on to appear in several television shows, while also landing minor movie roles.

After getting loads of attention for her role as the title character in Victor Nuñez’s 1993 Sundance Film Festival Grand Jury Prize winner Ruby in Paradise, Oliver Stone cast Ashley Judd in Natural Born Killers. But her scenes were cut from the theatrically released version of the film. Determined to succeed in Hollywood, the young actress managed to earn critical acclaim for her role as Harvey Keitel’s estranged daughter in Wayne Wang’s Smoke. She also won over audiences as Val Kilmer’s wife in Michael Mann’s Heat.

A few other non-memorable movies later, Ashley Judd scored a supporting role in the 1996 courtroom thriller A Time to Kill. The film received positive reviews from critics and was a major box office success. By the end of the 1990s, she secured several roles in various thrillers that performed well at the box office, including 1997’s Kiss the Girls and 1999’s Double Jeopardy. With these movies, Judd managed to achieve significant fame and success as a leading actress, thereby cementing her place as one of Hollywood’s brightest stars. Most recently, she appeared on the Epix drama Berlin Station from 2017 to 2019. She also starred in the 2019 family adventure film A Dog’s Way Home. 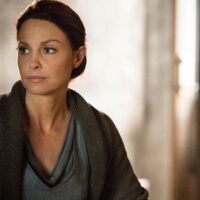 An Underrated Ashley Judd Movie Is Climbing The Netflix Charts