Marvel’s Eternals may not be the most anticipated film on the Marvel Cinematic Universe’s release schedule, but it is certainly among the studio’s most intriguing projects. Backed by a stacked cast and plenty of mythos from which they can pull pretty much whatever they’d like, director Chloe Zhao and her fellow filmmakers could totally turn this concept into something incredibly special. Now, after months of feverish anticipation, Marvel has finally released Eternals footage. And showcased in this particular snippet is none other than Angelina Jolie as one of the film’s most important characters.

Here’s the first footage from Marvel’s Eternals, which features Angelina Jolie as the warrior Eternal Thena:

As the above footage makes clear, we do not see much of Angelina Jolie, nor are we supposed to yet. Marvel Studios and Disney are notoriously secretive about their feature films, and they will probably remain tight-lipped about the nature and scope of her role until the film hits theaters later this year. Honestly, that is a great thing, because it preserves the magic of a movie theater experience. That being said, though, she will absolutely be a big part of the movie. We just do not know how yet. But no one in their right mind would cast Angelina Jolie and not use her.

The Angelina Jolie Eternals footage comes sandwiched between a teaser for Shang-Chi and the Legend of the Ten Rings and a brief showcase for upcoming features in the Marvel Cinematic Universe. Teases in the trailer included Spider-Man: No Way Home, Doctor: Strange In The Multiverse of Madness, Thor: Love and Thunder, and the newly revealed title for Black Panther 2: Wakanda Forever.

In addition to Angelina Jolie, Eternals stars Richard Madden, Brian Tyree Henry, Kit Harington, Kumail Nanjiani, Salma Hayek, Barry Keoghan, Gemma Chan, Lia McHugh, and Don Lee. It’s an incredibly impressive cast, one that will attract the interest of even the most discerning moviegoers. On the other side of the camera, Kaz and Ryan Firpo wrote the script.

If you’re wondering about the history behind who Angelina Jolie is playing, let’s dive into some quick backstory. Thena first formally appeared in Marvel Comics back in 1976’s The Eternals #5, but decades before being retconned and reworked, she was known as the mythological goddess Minerva. As a member of the Eternals, Thena possesses super strength, super speed, stamina, durability, and enhanced reflexes. Even more impressive is her ability to control cosmic energy so that her powers are augmented. Put a bit more simply: She is not anyone you’d want to mess with. Oh, totally forgot to mention: She wields a bow that fires “cold energy” arrows and also carries a spear that rings her enemies in scalding heat.

Eternals will be one of Angelina Jolie’s biggest roles in a long time. Not only is she joining one of the biggest, most beloved movie franchises on the planet, but she is also co-starring alongside an ensemble cast that, even without her, would get people into theater seats.

You can catch Angelina Jolie in Marvel’s Eternals when it hits theaters on November 5, 2021. 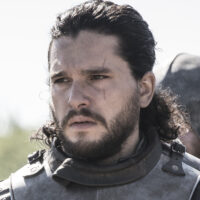