Tuesday brought the tragically awkward news that the death of Tony Dow — best known as the titular character’s older brother Wally — had been reported in error. As Deadline and others reported, Dow’s wife Lauren and his management team had incorrectly believed Dow, who was under hospice care at the time, had died. Sadly, today the news has been confirmed. Tony Dow has finally passed away from his struggle with cancer. He was 77 years old.

As Deadline and others reported, on Wednesday a message was posted to Tony Dow’s Facebook page, confirming his death. The announcement included a statement from Tony’s son Christopher who said, “Although this is a very sad day, I have comfort and peace that he is in a better place. He was the best Dad anyone could ask for. He was my coach, my mentor, my voice of reason, my best friend, my best man in my wedding, and my hero. My wife said something powerful and shows the kind of man he was. She said: ‘Tony was such a kind man. He had such a huge heart and I’ve never heard Tony say a bad or negative thing about anyone.'”

The love Tony Dow’s daughter-in-law talks about is certainly felt by Jerry Mathers, who played the eponymous Beaver. Mathers seems heartbroken by his TV brother’s loss, writing, “He was not only my brother on tv, but in many ways in life as well. Tony leaves an empty place in my heart that won’t be filled. He was always the kindest, most generous, gentle, loving, sincere, and humble man, that it was my honor and privilege to be able to share memories together with for 65 years.” He ended his tribute with “The world may have lost a star today, but the heavens gained another.”

Tony Dow’s signature role was Wally Cleaver on the landmark sitcom Leave It To Beaver which ran from 1957 to 1963. While Wally didn’t always understand what was going on in his younger brother’s noggin, he was often a protective presence for Beaver. In particular, he did what he could to shield The Beav from the machinations of Wally’s own malicious buddy Eddie Haskell. Deadline notes Haskell was played by Ken Osmond, who passed away in 2020.

As Leave It To Beaver progressed and both Tony Dow and Jerry Mathers got older, the former evolved into a teen idol. Dow made memorable appearances in other TV shows and movies after Leave It To Beaver, including Lassie, the short lived teen soap Never Too Young and — believe it or not — on the early nineties Nightmare on Elm Street spin-off series Freddy’s Nightmares. But Wally Cleaver would always remain his signature role, and one he even reprised for the eighties revival series The New Leave It To Beaver.

Tony Dow continued acting on and off to the mid-2010s however, starting with episodes of The New Leave It To Beaver, he made an impressive pivot behind the camera. Dow directed for quite a few TV series, including some high profile science fiction shows. For the last season of Star Trek: Deep Space Nine he directed “Field of Fire,” as well as five episodes of Babylon 5. His other directing credits include Coach, The New Lassie, and the Harry and the Hendersons series. 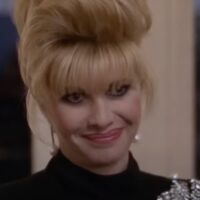