By David Harrison | 1 month ago

While Sunday night’s 94th Academy Awards ended up being completely overshadowed by the slap heard around the world (and especially in Hollywood), it was easy to forget that this is one of the most star-studded evenings in the whole industry. Celebrities from all walks get geared up for a night on the town including a number of industry after-parties and events. One of them was Jessica Alba who took to social media to give a little something of a getting-ready timeline as she headed out to a gathering.

The Instagram post originally went up on Monday, but was definitely originally from Sunday night with Jessica Alba getting ready for the Vanity Fair Oscar Party. This is just one of the who’s who affairs that take place after the awards ceremony and a number of notables attended. The Alba past thanked the host and then showed the transformation she went through to get ready. You can see the Instagram post below which had amassed around 80,000 likes at the time of this post.

What starts off like something out of a horror movie with Jessica Alba in some kind of creepy mast that’s meant to do god only knows what, quickly transforms into a gown more appropriate for the festivities. Set to the song “It’s Like That” from Mariah Carey featuring Jermaine Dupri and Fatman Scoop, the actress and businesswoman turns into an A-lister set for the party. And there were plenty of huge names that ended up turning out for this shindig. Again, it is one of the more popular get-togethers of the evening.

It wasn’t just Jessica Alba at the Vanity Fair party. That was also attended by one Mr. Will Smith who ended up being part of what will likely go down as the most infamous moment in Academy Awards history. After a joke by presenter Chris Rock was aimed at Jada Pinkett Smith, Will Smith took the stage and slapped Rock before walking off stage and continuing to yell at him. It was definitely a low-light of the evening with Will Smith going on to win the Best Actor award for his lead role in King Richard.

As for Jessica Alba, on the acting front, she has been taking it relatively easy over the last couple of years. Prior to the pandemic, she was a lead on L.A.’s Finest, a spin-off of the Bad Boys franchise that was part of Spectrum’s programming. The series was eventually bought by Fox though lasted only two seasons. And she does have a movie coming out in the next year with Trigger Warning coming to Netflix. That film is currently in post-production and also stars Anthony Michael Hall in a story about Alba’s character who inherits her father’s bar.

Of course, Jessica Alba doesn’t have to sweat out the acting stuff all that much with her Honest Company currently valued at more than $1 billion dollars. So yeah, she’s doing fine without needing to be on screen. Going and hitting the party scene gets the job done as well. 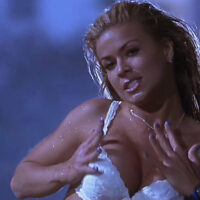