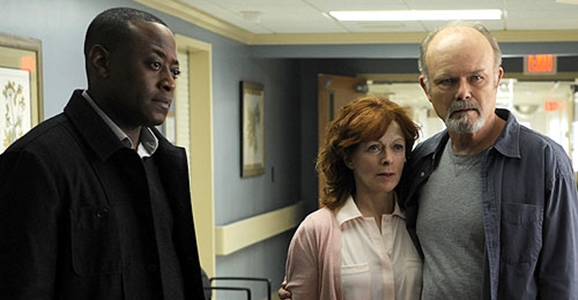 Resurrection (ABC, March 9)
Everywhere you turn, there’s a slow shambling pile of bones and tattered clothing groaning for your brains, as zombies are a major source of fiction in any medium. ABC’s upcoming mystery drama Resurrection will put a spin on the repetitious story of survivors hiding from mindless killers, and will present the undead in a somewhat original light.

Adapted from Jason Mott’s 2013 novel The Returned, which is also the name of a French series with a very similar concept, Resurrection takes place in Arcadia, Missouri, a town whose long-gone residents are no longer dead, appearing the same as they did in life. It all begins when an eight-year-old boy named Jacob Garland (Landon Gimenez) is found in China, and is brought back by an immigration agent (Omar Epps). It’s been 30 years since his death, so it’s understandable that Jacob’s parents (Kurtwood Smith and Frances Fisher) can’t really believe it’s him. His return is also a puzzling problem for the town’s sheriff (Matt Craven), whose wife drowned while trying to save Jacob. Will she be one of those who returns?

As long as it handles the mystery with deftness and things don’t get dragged down by maudlin melodrama, this could be a really interesting series that reminds audiences that not all zombies are created equal. Plus, it was developed by Plan B Entertainment, for which Brad Pitt is a producer. And he knows a little something about undead characters. – Nick