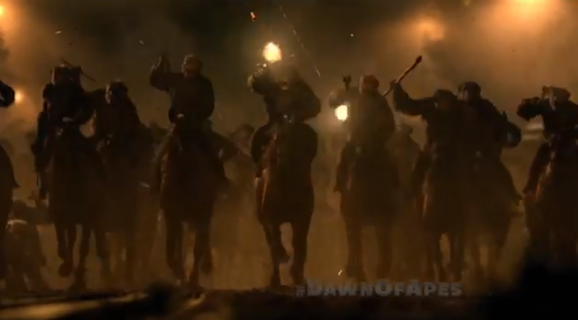 Brent: The real magic of Dawn of the Planet of the Apes is that you forget you’re watching special effects. Eventually you’re just watching and reacting to the characters and the story.

Nick: My favorite part, which I can’t believe we didn’t go over, was the huge fire-and-horseback action sequence, which was the highlight of my summer movie going. And it’s because the special effects have rendered these apes so believably that watching them attack a bunch of innocent humans with guns was flabbergasting. It made me feel less politically weird than the movie’s presumed “gun message” did.

Brent: While I didn’t have as much of an issue with the human side of things, they definitely could, and should, have been more developed.

Nick: I’ve already mentioned my problems with the story, I don’t feel like I’m being a stickler by saying my biggest pet peeve about this movie was that Gary Oldman’s plan in the end did absolutely nothing to further his cause or help out the human situation in any way. He wanted to kill the monkeys by blowing up the tower, yet he managed to only kill a few, while also destroying the human’s habitat and getting an entire nation of apes pissed off at all humans in the process. Way to go, dickhead. I wouldn’t be surprised to find out that the family he’s crying about in that one scene had left him long before the flu killed everyone.

Brent: I understand the impulse to blow it all to hell, but yeah, that was just fucking stupid.

Nick: I get why the character thought it was a good idea, I guess. It just pisses me off that it made it into the third act of an otherwise intelligent movie. Third acts are the pits.

In the end, unlike ape and man, we can look past our disagreements about certain issues, and still enjoy this film together.