A couple in Australia nearly had to call off their wedding for a second time after one of their bridesmaids was bitten by a particularly venomous snake.

Like many, Dan and Brittany Atlas were forced to call off their initial wedding day due to concerns over the COVID-19 pandemic. A snake wasn’t the issue the first time around. Earlier in August, they decided to move ahead with a paired-down ceremony in which many of their guests were not able to attend. Therefore, they gave the job of bridesmaid to their four-legged best friend, Ruby. According to ABC News in Australia, the couple got Ruby a few months after Brittany’s mother passed away to help her through the difficult time. Thus, she is an incredibly important member of the family. However, an encounter the dog had with a snake just a few days prior to the wedding almost put the whole process back yet again.

Four days before the big day, Dan came home to find Ruby very, very sick. He told ABC that Ruby was too sick to walk and was frothing at the mouth and incredibly cold. He immediately rushed her to the vet and they determined that she’d had an encounter with a brown snake. Common to the area, brown snakes are no joke and put the dog in a life-threatening situation.

According to Australia Geographic, their venom is some of the most toxic of any land snake on the planet. A venomous bite from a brown snake causes progressive paralysis and stops the blood from clotting, which may take many doses of antivenom to reverse. In fact, the veterinarian taking care of Ruby began to grow worried after she was given two whole vials of antivenene and her respiratory muscles continued to become paralyzed.

While scary for the couple, who noted they would have called off their wedding again in a heartbeat if Ruby didn’t make it, brown snake bites aren’t at all uncommon for people in Australia. According to the Australian Museum, humans encounter the brown snake a lot because they tend to thrive in populated areas. While typically they feed on mice and reptiles, a snake doesn’t survive long in an area populated by people without being able to defend itself. Not only will they actively seek out prey, but they’re also known to react quickly and aggressively to any perceived threats — like say a fully grown mastiff cross-breed that thinks it’s protecting its family.

While a brown snake is very deadly, and the one that Ruby crossed paths with put her on a road that could have easily been life-threatening, the silver lining of their ubiquity in the area meant that the vet both knew what it was dealing with and how to help. In addition to the snake antivenene, Ruby was intubated and kept on watch for 18 hours while the bride-to-be and groom put their nuptials out of their mind and waited on bated breath.

On the morning of the wedding, though, they got a call and began to rejoice. The vet sent along a photo of Ruby on the mend with a pink bow in her hair to mark the big day. Although she couldn’t attend the wedding and fulfill her bridesmaid duties because of the snake bite, the couple could finally get married knowing that their little Ruby was going to be OK. She is recovering at home with her parents, who are now happily husband and wife. 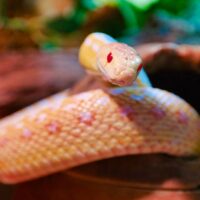