Eat your heart out Anaconda lovers because it looks like we have a new leader in the clubhouse when it comes to massive snakes that could strike intense fear in the heart of anyone trekking through the brush. Researchers in the Everglades in Florida have made a discovery and you are really going to need to see this thing to believe it. They say they’ve found the largest ever python snake on record in Florida slithering around the swamps down there, and it looks like it was about to give birth to massive baby snakes as well. This thing is absolutely enormous.

According to the Conservancy of South Florida, the largest-ever python snake was discovered and the metrics on this thing are staggering. It rings in at just under 18 feet long and weighs just around 215 pounds. The previous record-holder in this area has 140 pounds, so this latest find is crushing that relatively puny size, all things considered. Check out the size of this snake which looks like it could choke out a small SUV if it got good and riled up. This is definitely not the kind of thing you would want to have stepped over while on a little jaunt through the swamp. You have to see it to believe it.

According to AccuWeather, researchers had been on the lookout for a large snake in this region, thinking one was inhabiting the local area. They used male scout snakes to hone in on a location seeing as how these males are often on the prowl themselves for females with which to mate. The researchers followed one snake and then, apparently, heard a loud rustling in a bush. This is where they found the 18-footer, and like all good researchers, especially ones right out of a science fiction movie, they jumped on the snake to wrestle it into submission. Okie-Dokie.

Along with the massive snake, the group from the Conservancy also found that the snake was carrying a whopping 122 eggs as well. So there was bound to be more of these creatures in the area soon enough. Whether they could have or would have grown to the same size remains to be seen. And the researchers were also able to determine what meal this snake had right before it was captured. That was in the form of a white-tailed deer. Yes, you read that correctly, This snake was taking in meals that could be roughly human in size.

As of right now, the Burmese python snake is considered an invasive species in the Florida Everglades. It was not an original inhabitant of the area but rather introduced a few decades ago when people began releasing their pets into the wild when they no longer wanted to care for them. This can often lead to the animal just dying, but not this snake which has set up shop in the area and is actually driving other species out. You can see why when they get to the size of small cars. 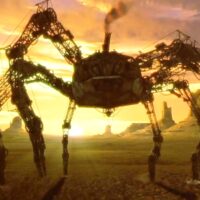 Dead Spiders Have Been Turned Into Necrobots