Experts Affirm That We’re To Blame For Global Warming “It’s your fault,” are words that no one particularly enjoys hearing. But that’s exactly what scientists are saying about global warming. But who else would we have blamed? The olinguito? Superman?

Ironically, but appropriately for the times, this rather obvious conclusion was apparently leaked from the fifth assessment report of the UN’s Intergovernmental Panel on Climate Change. Reuters was able to get an early look at drafts of the report, which will be published in September.

The report attempts to quantify what we already knew, asserting that “it is at least 95 percent likely that human activities — chiefly the burning of fossil fuels — are the main cause of warming since the 1950s.” When the last report was issued in 1997, scientists put the likelihood of human activity being the cause of global warming at 90%. Six years earlier, that number was at 66%. In the first report published in 1995, experts we were only 50% sure that humans were to blame for the planet’s temperature increases. Bit by bit, scientists have confirmed that global warming can’t be attributed to natural climate fluctuations. The more we know, the more we know who to blame, but that still raises three big questions: how bad will this be? When? And what the hell are we going to do about it? The more we learn about climate change, the more likely it seems that the impacts of global warming will be catastrophic. Another downer in the report is that scientists are having a harder time than anticipated predicting the impacts in specific regions and in specific time-frames, which makes it more difficult to come up with time and area-specific solutions or resolutions. Generally, the lack of solid predictions for temperature increases has been a disappointment for a while. “People ask, ‘what’s the temperature going to be in this region in the next 20-30 years, because that’s where our power grid is?’” said NASA climate scientist Drew Shindell, but they “can’t really tell. It’s a shame.”

The IPCC’s 2007 report predicted the melting of the Himalayan glaciers by 2035, which the panel has admitted is a miscalculation. The soon-to-be-published report, as well as two additional reports set to be published in the next 18 months, will undergo scrutiny and perhaps skepticism. The report will downplay the 2007 claim that increased droughts are also attributable to human activity, but asserts “unequivocal” evidence of rising sea levels and projects a further 29-82 cm rise before the end of the century.

The report notes that governments are set to negotiate an international deal in the next two years to cap rising emissions, and evidence in the report supports the argument that greenhouse gas emissions have already been found to cause higher temperatures. Nearly 200 governments will try to contain global warming to less than 2 degrees Celsius above pre-industrial average temperatures — temperatures are, on average, 0.8 Celsuis higher now than they were during the early 1800s — though specific strategies for doing that remain somewhat ambiguous. Still, the report predicts that in this century, global temperatures are likely to rise more than that.

While all of this seems pretty grim, there is some good news in the report. Even though global temperatures are on the rise, since roughly 1998 the trend has slowed a bit. The IPCC has “medium confidence” that the slowdown is attributed to natural weather variations and other factors such as volcanic ash, which blocks sunlight and increased levels of carbon dioxide, which may make the climate less sensitive. It’s also possible that the slowdown is random or a fluke. It blows my mind that there are still people out there — politicians, no less — who vehemently deny the existence of global warming despite “unequivocal” evidence. The Silver Unicorn Award, while a pretty awesome trophy for politicians in denial, is also a depressing testament to humans’ unwillingness to take responsibility for their actions. If Superman can’t fix this, maybe Godzilla can? 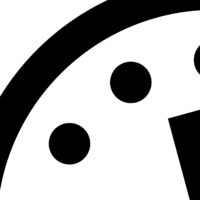 The Doomsday Clock: We’re Now Closer To Midnight Than Ever Before