Wonder Woman 1984 remembers what superhero stories used to be like. They weren’t just big with their action and costume choices. They understood that these larger-than-life characters and the worlds they inhabit could be equally large with their emotions. Just like the myths of old, these were stories that used immensity and intensity to illuminate the power of human feeling. It wasn’t just about epically violent showdowns and quotably quippy lines. It was about hearts that were as big and loving as the heroes that surrounded them.

And my goodness is Wonder Woman 1984 overflowing with heart. In a year that has seen us at our lowest, this movie comes crashing in and reminds us that people are still good and the world is worth fighting for. The story is ostensibly a sequel to the previous film, but it stands on its own two legs and has its own priorities. This isn’t just more of the same. Director/co-writer Patty Jenkins is on a mission to embiggen her world and characters, and that means giving them the time they need to work.

Yes, Wonder Woman 1984 might actually come across as “slow” to audiences conditioned by most modern action storytelling. There isn’t some grandiose set-piece or a trailer-worthy fight scene every twenty minutes. This movie is about characters and their desires, conflicts, and what they attempt to do to overcome or submit to them. The story thread that ties all of this together – a magical stone that can grant someone a single great wish – is woven into each of the main characters in exceptionally clever and compelling ways.

For Diana Prince (Gal Gadot), it obviously has to do with the return of her true love, Steve Trevor (Chris Pine). Gadot and Pine still have the same magnetic chemistry from the first film, but Wonder Woman 1984 allows Steve to be the fish out of water this time, leading to some endearingly funny moments. Their romance is a delight and where their story goes leads to an empowering and beautiful moment that recalls the best kind of “firsts” in superhero stories. We won’t spoil it here, but suffice to say it stands as the kind of classical superhero scene that we love to see.

And even more fascinating might be how Wonder Woman 1984 handles its villains. Maxwell Lord (Pedro Pascal) is a man who craves power and respect at whatever cost, but the film humanizes his feelings in ways that make him feel less like a mustache-twirling baddie and more like a pitiful cretin whose power fantasy is finally fulfilled. Pascal is having the time of his life playing Lord as a slick con man who actually buys into his own lies. It’s a delightful performance that adds gravitas to a character that could have easily been little more than a cartoon.

And then there is Kristen Wiig as Dr. Barbara Minerva. Her character is probably the most familiar to comic book aficionados: a dweeb who has no social standing or sense of self-confidence. Watching her relationship evolve with Diana throughout Wonder Woman 1984 allows Wiig to deliver some of the best work in her whole career. This is a character whose journey is a steady decline into that power fantasy, and it is hard not to get wrapped up in her perspective. That’s one of the smartest weapons in this movie’s arsenal: making sure we spend ample time with all the major characters so that we understand and even empathize with their choices. That might seem hackneyed to some viewers, but it’s actually implementing classic comic book storytelling in this regard.

So while some people might bemoan the lack of continuous action in Wonder Woman 1984, the film builds to its big superhero beats and earns them. This is all helped by Patty Jenkins’s expert sense of action geography, steady kineticism, and focus on the characters in the moment. The first two opening action sequences tell us so much about Diana through purely visual storytelling, and they reward the character more than they do the base pleasure of seeing a character do cool things. There are still cool things happening – the biggest of these is a car chase sequence – but it’s what the action is telling us about the characters that shines through.

And by the end of the film, Wonder Woman 1984 is unflinching with its desire to see the good in people. Superhero stories are supposed to be an inspiration to us. They are meant to remind us what is good about humanity and society. And though the film is doing it in a pointed and blatant way, who cares when its emotions and the delivery of those feelings are so strong? This isn’t a movie where the problem is solved with the biggest punch. It’s solved with the biggest heart.

And boy could we use more of that as 2020 winds down. Wonder Woman 1984 recalls the kind of warm but welcomingly hokey nature of Sam Raimi’s Spider-Man films when they were at their best. It’s a film that understands the iconography and the soul that has made superheroes the dominant form of American popular fiction over the last century. It’s a film that speaks to the compassion of superheroes and how they are supposed to inspire that same compassion in us. It feels appropriate to leave this review on the kind of cheesy and enthusiastic statement that Wonder Woman 1984 would proudly endorse: this is the movie we all need right now.

And that mid-credits scene is an ALL TIMER. 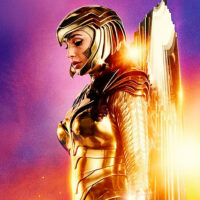