Tom Felton, the actor known best for playing the mischievous and cruel Draco Malfoy in the Harry Potter adaptations, has just admitted to a big ol’ lie. Well, it’s not exactly a huge lie, and believe it or not, it’s too nice of a lie for his character to have told. Specifically, Felton lied to fans — starting with a little girl — about what it’s like to fly on a broom during a quidditch match.

Now in his mid-thirties, Tom Felton tells Square Mile he was only a teenager when he and other actors were fielding questions from eager Harry Potter fans at one of the San Diego Comic Cons, when a young girl asked the Draco Malfoy actor what it was like to fly around on a broom. Malfoy, like his rival Gryffindor rival Harry Potter, was the Seeker on Slytherin’s quidditch team, and so made plenty of time flying around the sky. But, not really of course, because it was all accomplished through the magic of special effects. So, at first Felton says he responded, “Sorry, love? What’s it like to fly a broom? Painful! Horrible! You sit on this metal pole and they blow wind in your hair!”

Tom Felton says that as the young fan started looking upset, he quickly switched directions. Instead, he “corrected” himself and told the girl, “It’s one of the greatest experiences in your life! How old are you? You’re nine. You’ve got two more years and you’ll find out for yourself.” The last bit about finding out “yourself,” Felton says, is something parents have often asked him to use “as ammunition.” They’ve made requests of Felton, he says, such as, “Tell them they won’t get into Hogwarts unless they do their homework!” Of course, the kind of homework you might need to do to get into Hogwarts is probably not the kind of homework most parents would want their kids to complete, but apparently this is forgotten.

Of course, much more physically trying than little white lies, Tom Felton suffered some of his own injustices during the making of the Harry Potter saga. In HBO Max’s recent reunion special Harry Potter 20th Anniversary: Return to Hogwarts, Jason Isaacs — who played Draco’s cruel father Lucius Malfoy — revealed he accidentally hurt Felton worse than his character meant to. In a deleted scene from 2002’s Harry Potter and the Chamber of Secrets, we see the father and son browsing in one of the shops of Diagon Alley. Draco touches something in the shop and Lucius strikes at him with the end of his cane — which ends in a fanged snake head — and scolds him, insisting he not touch anything. While Draco is meant to pull his hand away at the last second, Isaacs said in one take he actually struck Felton, fangs and all. Isaacs said he apologized profusely to the young Tom Felton who, in spite of tearing up, responded with, “It’s all right, it’s good for the scene.”

Tom Felton most recently starred in the British produced Save the Cinema, directed by Sara Sugarman. Screen Daily reports the film is based on the real life story of Liz Evans, a hairdresser who campaigned to save a struggling local theater in the ’90s. The film also stars Louisa Cliffe and Jonathan Pryce (Brazil). 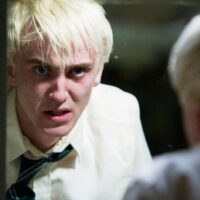