Star Wars has created such a right and expansive universe with characters who continually push new boundaries. They’ve done that since the franchise first came out more than 40 years ago and the same is true today. And on National Trans Day of Visibility, according to Variety, the folks from the franchise chose to introduce and highlight a couple of characters who’ve been in the ranks for some time now. This time around the Star Wars folks reminded everyone that two Jedis, Terec and Ceret, were trans non-binary characters and featured them on the cover of Star Wars: The High Republic.

Terec and Ceret’s appearance on the cover of Star Wars: High Republic comic book marked the first time they were placed front and center of the publication. They made the announcement via Instagram and you can see the post below.

In the Instagram post, which came from the official Star Wars account, it’s clear that the franchise is working to support and embrace trans lives and are going to work to continue expanding the world in this respect. Terec and Ceret are twins, Jedis featured in The High Republic story lines. They are connected mentally through a bonding and often have the same thoughts and quotes, even finishing each others sentences in conversations or on the battle field.

It was known that these two Star Wars characters identified as transgender non-binary in the storylines from the comic book but this announcement on the Instagram feed and on the cover makes it clear the franchise’s solidarity with the cause. Star Wars: The High Republic is an ongoing storyline that was just introduced last year as part of an initiative to bring more stories in the novel, graphic novel, and comic book form. The timeline happens about 200 years before the events of A New Hope.

For Terec and Ceret, they appeared on the cover of Star Wars: The High Republic issue six though they made their debut in the second issue. It stands to reason that they will now have more expanded storylines with their gender identification taking a more prominent role in additional stories.

As of right now, there don’t appear to be immediate plans to bring the Star Wars: The High Republic stories and characters to either the big or small screen. Because the initial push was to introduce these characters in the book and comic book form, the focus now is creating the back story and the events to will eventually lead to the Star Wars stories we know and love. It’s worth noting though that there is a tie-in here because Yoda, that ancient one, is actually alive during this timeline.

Time will tell if The High Republic characters and stories, including Terec and Ceret will ever with the screen. This being Star Wars, it’s a pretty safe bet we get them sooner than later. Because the publications, labeled by LucasFilm “Project Luminous” is less than a year old, we are still getting established in this world. But it’s a safe bet and a newer certainty that one day we’ll get this group of characters on the screen. 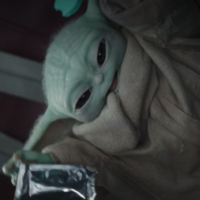