Star Trek: Discovery fans aren’t going to want to hear this latest rumor, not even one bit. But there has been some scuttlebutt of late that the series might be on life support on Paramount+ and this next season could be its last. While the decision would appear surprising considering the critical-favorite nature of the program with its solid critical consensus. But there is a growing sense that the numbers might just not be there for the program right now.

The latest Star Trek: Discovery rumor comes from a couple of different “sources”. The first is Twitter user @GeekAuthority who posted that the show was on its way out and that series creator Alex Kurtzman was getting the ax. Now, it is worth noting that this account isn’t a massive one and that the original tweet was summarily ratioed. But then there was a follow-up with YouTuber Doomcock jumping into to “confirm” the original scoop. Check out the messages in question:

Additionally, this rumor from the original Tweet mentions that it wouldn’t just be Star Trek: Discovery on the chopping block. While Kurtzman is mentioned specifically, if it was CBS jumping starship on this franchise then that could also include Star Trek: Picard, Lower Decks, and Prodigy as well. Considering the commitment CBS has to these properties at present, it’s hard to believe they would just call it quits across the board. But this could more speak to rumblings about how specific series are taking shape and what the future looks like.

Star Trek: Discovery has three seasons in the books already and is heading for a fourth. We’ve already seen some early images of changes they are making for this next set of stories and they’ve taken quite a few liberties with how they’ve used the timelines for the show. It’s been tough to track the ratings for the show after it originally aired on CBS and then moved over to Paramount+. It stands to reason with the increased development around Star Trek properties that they were seeing solid results.

And from a critical perspective, Star Trek: Discovery has been a hit. All three seasons of the show have scored over 80% on Rotten Tomatoes with critics incredibly impressed especially with the show’s lead Sonequa Martin-Green as Michael Burnham. She started off the show, not as the captain of the ship, but has worked her way there over the course of the show. One thing that’s interesting to note about the Rotten Tomatoes score, for what it’s worth, is that though the critics have been full of praise fans might not be on board as much. The Audience Score for Star Trek: Discovery is sitting at 42%.

Even if the plan is to cancel Star Trek: Discovery, that isn’t happening right away anyway. There’s a fourth season of the series reportedly coming later this year on the streaming service. While no official release date has been set, the series has been filmed and is apparently already in the can. So worst-case scenario, we are getting at least one more season of the series. And I suspect there will be more as well. 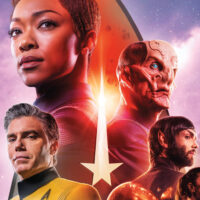