Seth Rogen May Return To His Greatest Character

Seth Rogen has played a lot of characters over the years. Many of them, he created with his co-writer and best friend, Evan Goldberg. Still, fans remember him in his very first role on Freaks and Geeks, where the actor played Ken Miller and began his working relationship with the famous director Judd Apatow. The show aired for only one season in 1999 and 2000, and it didn’t do well in the ratings. However, the cast is full of actors who are now very well known and the series has picked up a serious following as people have rediscovered the show on streaming over the years. Is it just waiting for a reunion to tell more about what’s happened with these characters?

The audience is there, that’s for sure. And that seems to be something that director Judd Apatow and the Freaks and Geeks show creator, Paul Feig, would agree with. In a recent interview for Collider, the pair weighed in on the possibility of a Reunion special. Neither of them ruled it out. It seems reasonable to believe that after all of these years working together, that if Judd Apatow asked Seth Rogen to return for the special, he would. Paul Fieg noted that, “I always joke that we couldn’t afford to do it because they all cost too much now.”

That may be an actual concern. However many of them would likely be negotiable, depending on how long the reunion special would be. The show starred Seth Rogen alongside names we know today like James Franco, Linda Cardellini, John Francis Daley, Jason Segel, Martin Starr, and Busy Philipps.

One major wrench for the possibility of a reunion special is actually in James Franco. While he has arguably picked up a lot of fame over the years, he is also now a controversial figure. His behavior hasn’t been stellar. He’s publicly facing sexual misconduct allegations. Seth Rogen has come under fire for his association with Franco, and has publicly said that he has no plans to work with the actor and former (?) friend. It’s fair to assume that will go for many of the other people involved in a possible Freaks and Geeks Reunion.

However, that honestly doesn’t rule it out. Judd Apatow joked that in reality, many of the characters on Freaks and Geeks may have ended up in situations that would have been more depressing than funny, which seems fair. A lot of the characters are misfits and troublemakers, including Seth Rogen’s. This was particularly true of James Franco’s bad-boy character, so it may make perfect sense story-wise for him not to be there at all.

Still, Judd Apatow and Paul Feig seemed torn on the idea. They suggested that if they had the perfect idea where they thought it would be great, they would do it. If they’re going to come up with that idea, it would be good for them to do it sooner rather than later. They mentioned that realistically, the actors are still quite young, which would be an advantage for the show. Of course, they’re growing older all the time, and eventually, some of them may retire from acting. For right now, Seth Rogen is still out there and doing things. Would he sign on for a reunion for his first-ever show? After all this time, is this something that fans want? 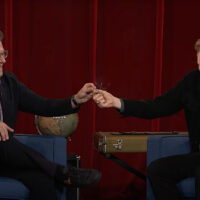