Disney has been spoiling its Disney+ subscribers for months now. From the live-action Mulan‘s Premier Access last September to Pixar’s Soul to March 5’s Raya and the Last Dragon streaming release (also slapped with that pesky $30 price tag), the ever-growing streaming service has created a very temporary “new normal”. And fans may have trouble returning to the “old days” when theaters finally open back up. Disney is counting on theaters making a full comeback, staking a huge, Scarlett Johansson-led release on the hope that viewers’ desire to go to the multiplex is indeed still alive.

According to Deadline, Disney and Marvel Studios are still shooting for a theatrical release for one of their most anticipated titles, the twice-delayed superhero adventure Black Widow. This comes just a few weeks after we reported on yet another potential delay. While the film’s release is still scheduled for May 7, 2021, new reports indicate that Kevin Feige is not pursuing a simultaneous Disney+ release.

For those who may not know, here is part of the film’s official synopsis: “The Black Widow confronts the darker parts of her ledger when a dangerous conspiracy with ties to her past arises.” Scarlett Johansson’s solo adventure takes place between the events of Captain America: Civil War and Avengers: Infinity War, meaning that Natasha Romanoff is definitely still dead following the tragic events of Avengers: Endgame. That just means that it will be even more of a treat to see the actress return to her role as the beloved super spy. Maybe Marvel is setting things up so that Florence Pugh takes the mantle of Black Widow and resolves to kick butt in her sister’s name.

Disney’s new CEO, Bob Chapek, confirmed the news today on a fiscal year first-quarter earnings call. When asked about why they released certain movies as Premier Access titles and others as Christmas Day streaming releases for all Disney+ subscribers, he said, “We thought it was a nice thing to do for the consumers and subscriber base.” Chapek took over for former CEO Bob Iger back in February 2020, ushering in a new era of leadership for a company that had grown and thrived under Iger’s watchful eye for more than 15 years. It’s clear though that just because the studio released other films in a dual method, Scarlett Johansson and company won’t get the same treatment.

Fans of Scarlett Johansson and her co-star Florence Pugh may be disappointed that Bob Chapek, Kevin Feige, and his fellow Marvel architects are holding off on her film’s Disney+ availability, but consider the intent behind it: Money is absolutely a motivator here (always is, but that’s business), but so is ensuring that Marvel fans are treated to the best, most mind-blowing moviegoing experience possible.

It is interesting to see the divide between consumers who prefer the traditional moviegoing experience and the people who are more content watching new, theater-ready releases on their home televisions. I have noticed that the divide is fairly even, with many purists preferring the multiplex to their living rooms and more casual viewers being of the opposite opinion. Could Scarlett Johansson and Black Widow begin ushering folks back to theaters en masse?

I think this is a really smart move, honestly. Watching superhero movies at home just doesn’t hold the same appeal as a night out at the movies. These stories were meant to be seen and experienced on the big screen. And settling for anything less when the pandemic’s end may be in sight dilutes the unifying quality of these kinds of movies. Hopefully, this turns out to be the smartest and most prudent decision.

Fortunately, it sounds like it will be. They are honoring moviegoers by resolving to keep them safe while refusing to sacrifice that “wow” factor that makes these movies so fun and so endearing. Hopefully, others will see it that way, too.

If you can’t wait for Black Widow but want more Scarlett Johansson now, go back and watch her previous turns as Natasha Romanoff. She ends up becoming one of the biggest and best parts of the Infinity Saga, a role that grows in importance when you realize that Thanos could not have been beaten without her sacrifice. It will be great to see the Marvel Cinematic Universe introduce new dynamics that really aren’t Avengers-related. Marvel is a rich tapestry of characters and concepts, and I’m very glad that Feige and company are starting to branch out and explore other aspects of this amazing universe. 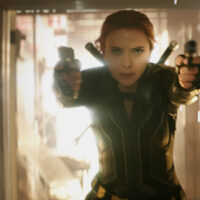