As many of you know, May fourth is Star Wars Day. To celebrate, many online retailers are offering exclusive products and irresistible deals for merch-hungry fans. Heck, even popular, pop-culture-focused art galleries are selling limited numbers of high-quality Star Wars art. But for some fans, the real appeal of Star Wars Day lies in the various ways it’s celebrated by the people who played a part in bringing it all to life. The latest Star Wars cast member to post about it? Why, Mace Windu actor Samuel L. Jackson, of course!

But anyone with even a passing interest in film knows that Samuel L. Jackson’s filmography extends far beyond Star Wars. One of his most famous films, the Quentin Tarantino-helmed Pulp Fiction, is also one of his best, and now he is combining Star Wars and Pulp Fiction in a really fun way for his fans on social media. He posted the first one on May third.

And another on Star Wars Day itself.

As you can see, Samuel L. Jackson is having an absolute blast celebrating May the Fourth. And as the guy who portrayed Mace Windu in three Star Wars films, he has every reason to be pumped about the big day. Not only that, but he also picked another film that he knew people would recognize and loosely linked it with that galaxy far, far away.

Samuel L. Jackson debuted as Mace Windu in 1999’s Star Wars Episode I: The Phantom Menace, but we did not get to see him in action until its critically-panned follow-up, Attack of the Clones, hit theaters in 2002. After that, we witnessed the conclusion of Windu’s arc in Revenge of the Sith, which saw the formidable Jedi Master soundly defeated at the hands of Emperor Palpatine and his new apprentice, Anakin Skywalker. There is debate about whether or not Mace survived his seemingly fatal fall from a lofty Coruscant skyscraper to the crime-ridden streets below, but that likely will not be settled anytime soon.

In Pulp Fiction, Samuel L. Jackson portrayed the hitman Jules Winnfield. While dramatically different than Mace Windu, Winnfield had a similar effect on viewers, who were rightly mesmerized by Jackson’s commanding performance.

As for whether or not Samuel L. Jackson will ever return to the role of Mace Windu in a future Star Wars project, there are few who know the real answer to that question. We have, of course, heard rumors that he would indeed be coming back in some capacity, but that has not been confirmed by the studio or the trades.

It’s awesome to see Star Wars legends such as Samuel L. Jackson doing what they can to amp people up for Star Wars Day. While showing off fun T-shirts may seem like a small way to celebrate, it definitely beats any kind of radio silence. It’s nice that Star Wars still seems to hold a special place in his heart, and hopefully the coming years will continue to honor the now-sacred tradition of keeping George Lucas’s beloved franchise alive. It deserves nothing less, and anyone who has ever loved Star Wars knows that. 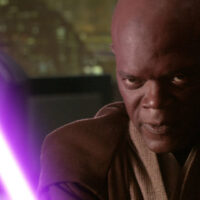