Keira Knightley Comes Out Against Reading Fairytales To Kids

Keira Knightley is no stranger to the land of fantasy and fairy tales. However, the Pirates of the Caribbean star recently spoke out about her feelings towards some specific classic stories and how she will not be exposing her children to them.

In the interview, Keira Knightley pointed out how stories like Snow White and Cinderella represent antiquated forms of romance and representation for women. Instead, Knightley much prefers Disney’s handling and subversion of these tropes in films like Frozen. Knightley said that this modern take on the archetypes was “brilliant.”

“What are we teaching girls when we’re telling them it’s OK that they were asleep and this guy that they’ve never met comes and kisses them. Or you know, what are we telling them that the Cinderella story, he doesn’t even ask her name! I mean the very least that you should do when you’re flirting with a guy is that you should both get each other’s names! I sort of looked at it and we, whoa we’re pumping our young girls full of some very strange notions and very strange ideals about, you know, you should love at first sight and get married instantly. And I think, you know, Frozen has brilliantly dealt with that. Having a kid and then watching or reading those fairytales had me go, wow what are we saying to girls. Right from 2-years-old that we should be waiting to be rescued and that we should be ready to give up our voices for guys and that we should be thankful if somebody will kiss us when we’re asleep.”

Keira Knightley herself played a pivotal part in Disney’s fairy tale fantasy film The Nutcracker and the Four Realms. She was also cast as Guinevere in 2004’s King Arthur, a grounded retelling of the landmark legend. She has even appeared in the biggest space fairy tale of all time, Star Wars, as the character of Sabé, one of the handmaidens to Queen Amidala. Sabé even had to impersonate Amidala in Star Wars: Episode I – The Phantom Menace.

It is worth taking Keira Knightley’s viewpoint on classic fairy tales with some seriousness. The deep history behind popular fairy tales is often dark and surprising when you actually do the research on these stories. There have even been instances where the original versions have been banned from schools for reasons of “excessive violence, negative portrayals of female characters, and anti-Semitic references.” Knightley’s feelings are not totally unjustified.

But, Keira Knightley is also viewing this discussion from the perspective of a parent, and parents will always want to do what they think can protect their children the best from potentially harmful ideas. Knightley acknowledges that she loved movies like Cinderella and The Little Mermaid when she was growing up, but has decided to “ban” them from her daughters’ upbringing.

Keira Knightley is currently doing press rounds for her new film, Misbehaviour. In the film, Knightley plays feminist activist Sally Alexander as she joins the Women’s Liberation Movement in protest of the Miss World pageant in 1970. Alexander looks at how the perception of the Miss World pageant affects her own young daughter and decides to do something to change or possibly even abolish it.

So, it sounds like this particular role has caused Keira Knightley to do a reassessment of her own daughters’ lives and what they are consuming as part of their entertainment diet. In the same way the Miss World pageant scrutinized women and their physical attributes, Knightley seems to feel that certain fairy tales – and their modern-day adaptations – limit potentials for young girls and women.

Keira Knightley is well within her rights as a parent to choose what she does and does not want her children to see in movies. Whether or not any of us agree with her stance is irrelevant. It is her choice as a parent and we should respect that. Thankfully, Knightley is not out here calling for the cancellation of these stories. She is simply saying that it is time to reevaluate their merits and to celebrate the newer material that is pushing the genre forward. However, we still reserve the right to watch The Little Mermaid whenever we want. 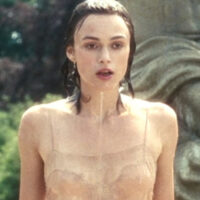