Season three of Kaley Cuoco’s Harley Quinn is not ready yet, but it is coming. Season two left off with some big promises fans are excited about. Often, when a show isn’t quite ready yet, but they want to share an early teaser, they’ll use footage from the previous season. This is to remind fans why they like the show, even if they aren’t showing audiences anything new. The team behind Harley Quinn season three decided to do one better for the DC FanDome trailer, though their animation wasn’t entirely ready yet. They brought in Harley Quinn and King Shark (Ron Funches) for a little fun vamping, and then showed off a sizzle reel of where they’re at on season three, giving fans a look at what to expect.

See the new trailer with Kaley Cuoco below.

HBO Max is going to premiere season three of Harley Quinn at some point in 2022, but as the teaser makes clear, they aren’t promising when that’s going to happen exactly. As Kaley Cuoco said, they first need to get the crayon guy to work on season three and the people who make the awesome sound effects. Animation is hard and takes time to make it great. That said, these black and white pictures are reminding fans of where season two left off. They also give some promises for where the next season will go.

The end of season two saw Kaley Cuoco bravely going up to Poison Ivy and finally telling her how she feels right in the eleventh hour. Poison Ivy was all ready to marry Kite Man, who was briefly seen at the end of the season three teaser video. Jim Gordon busted in and made problems for the wedding, but Harley Quinn’s confession of love complicated matters to a greater degree. Now Quinn and Ivy have run off into the sunset together.

While no one really knows what Kaley Cuoco’s character will get up to this season, the trailer is promising fans that she will be with Poison Ivy. Likely, they’ll be creating problems in Gotham together. Definitely with Commissioner Gordon (voiced by Christopher Meloni) on their tail, who seems focused at the moment on getting the pair behind bars.

Season three of the Kaley Cuoco animated series is marking a moment of transition for the show, one that put Harley Quinn’s future in doubt for fans. For a brief moment, it had looked like the show might have been canceled altogether. Harley Quinn was originally launched on the DC Universe streaming platform. That’s where fans could watch the first two seasons. In September of 2020, it was announced that season three would stream on HBO Max and the show was moving over. That seemed like a good move where hopefully the show will catch more viewers as HBO Max has proven to be a competitive streaming service but may confuse established fans of the show.

Harley Quinn and Poison Ivy will be back for season three, probably with a lot of Catwoman and Batman, and definitely a lot of F-bombs. Fans can look forward to hearing Kaley Cuoco on HBO Max sometime in 2022, but it seems like the Eat Bang Kill tour roughly begins now. Expect more promotions and teasers in the coming months. 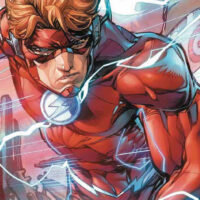