Jennifer Lawrence is one of the most in-demand actresses of her generation. After winning the Best Actress Oscar for her performance in Silver Linings Playbook, the thespian has continued to attach herself to exciting and one-of-a-kind projects. Well, it looks like she has lined up yet another showcase for her talents, and she will be teaming up with none other than Will Ferrell to bring a truly wild true story to the big screen.

Industry insider Daniel Richtman is reporting that Jennifer Lawrence has become attached to portray the lead character in Bad Blood, an adaptation of the true story about Elizabeth Holmes. Holmes was the CEO of Theranos, a medical tech company that promised radical new leaps in blood testing technology. However, the company eventually came under fire for fraud charges and Holmes herself became embroiled at the center of a nutty story that saw her falling victim to tons of conspiratorial thinking. Will Ferrell will be producing the movie.

Jennifer Lawrence certainly has the acting talent to portray Elizabeth Holmes, a character that saw herself as a true savant in the field of medical technology. Or rather, her involvement with the company seemed more focused on marketing, promotion, and media management than actual hard science. Holmes herself began to believe any criticism of Theranos and their medical technology was being spearheaded by her private medical tech competitors. This led her to some truly insane leaps in logic and should provide a lot of meat for Lawrence’s eventual performance.

Before we get to see Jennifer Lawrence in Bad Blood, you can actually watch an in-depth HBO documentary on the entire story called The Inventor: Out for Blood in Silicon Valley. Directed by celebrated documentarian Alex Gibney (Going Clear: Scientology and the Prison of Belief), the movie details the rise and fall of Elizabeth Holmes and Theranos in detail and is a truly compelling watch on its own. Hopefully, Bad Blood can find a way to be as entertaining and thought-provoking as Gibney’s documentary.

There is a lot on Bad Blood‘s side though. In addition to casting Jennifer Lawrence in the lead role as Elizabeth Holmes, Daniel Richtman reports that Adam McKay is one of the assigned writers on the project. Considering McKay’s interest in true story films like The Big Short and Vice, there is a possibility that he will end up directing this movie unless there is someone else yet to be announced as director. McKay might be best known for his comedy offerings like Step Brothers and Anchorman: The Legend of Ron Burgundy, but if he does end up directing Bad Blood, he will have another true story drama under his belt. He also has the Netflix film Don’t Look Up coming out later this year.

We will have to wait and see when Bad Blood goes into production and just what kind of take Jennifer Lawrence brings to the stranger-than-fiction character of Elizabeth Holmes. If the movie plays its cards just right and Lawrence can deliver a unique performance, she could be looking at her fifth Academy Award nomination. Fingers crossed we hear more about this project sooner rather than later. 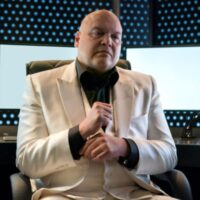