When Gina Carano was fired from the Star Wars franchise and The Mandalorian series specifically, it raised quite a few questions about how things move forward. There was talk that she was in place to basically lead her own series in the universe for starters. But there was also a question about how the writers would choose to take her Cara Dune character going forward. According to insider Daniel Richtman, the show’s writers are planning on addressing the issue in the next season. In this way, it doesn’t seem like Carano will be retconned out of the universe.

How The Mandalorian writers choose to deal with Gina Carano/ Cara Dune’s character exiting from the show remains to be seen. It would make sense to have a reference to her death in some way to eliminate any further speculation about the actress ever returning to Disney. That might sound harsh and I wouldn’t necessarily agree with a full termination of the character (just in case she gets uncanceled at some point) but from the studio’s perspective, it’s hard to imagine they want to keep the door open at all for her to ever return.

Before facing her ouster from The Mandalorian and Star Wars on Disney+, it sure seemed like Gina Carano was going to be an anchor for the franchise moving forward. Her character was incredibly popular and could kick a lot of ass, lending itself for cool guest spots on the show and maybe eventually leading her own series. It appeared that was going to be on Rangers of the New Republic as either a key piece of the story or maybe even the lead character. Those latter pieces are over now obviously so the show will have to pivot in a new direction.

Considering Gina Carano had a major role in the show, even up to the final moments of The Mandalorian’s Season 2 finale, “Chapter 16: The Rescue”, it’s good to know the writers will address the character in some respect or another. While it might not be the send-off fans would have originally envisioned for the actress or the character, ignoring it altogether would have presented something of an elephant in the room scenario.

Gina Carano was removed from The Mandalorian and the Star Wars franchise as a whole a couple of months ago when her will-they-won’t-they-fire-her saga finally came to a close. There had been much speculation that controversial social media engagement by the actress around a number of different hot button topics (the presidential election, mask-wearing) would lead to her being removed from the show. But things came to a head when she fired off a post that compared the plight of Jews during the Holocaust to the treatment of modern-day Republicans. That spelled the end for her as Cara Dune.

Season 3 of The Mandalorian isn’t set to hit screens until early 2022 so there is some time to figure out how Gina Carano technically made her exit from the story. But we do know that Cara Dune will be no more and the writers plan to tell us “why”. 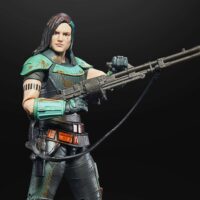