Chris Pine and Gal Gadot have proven they have strong chemistry that has resonated through Wonder Woman and the recent Wonder Woman 1984. Even despite Pine’s Steve Trevor dying in the first Wonder Woman, the franchise found a way to bring the actor back to maintain this relationship. But if a recent rumor is to be believed, Pine and Gadot almost starred in a third movie together.

Gossip entertainment writer Daniel Richtman posted the rumor on his Patreon that apparently Gal Gadot turned down playing the female lead in the Dungeons and Dragon movie, which will star Chris Pine. It’s unclear where Richtman is getting this information from, but considering how much audiences like the chemistry between Gal Gadot and Chris Pine, it makes sense that Gadot was at least considered for the role.

Not much is known about the upcoming Dungeons and Dragons movie, although the project did confirm that Chris Pine would be starring, albeit without Gal Gadot by his side. The film will be written and directed by Jonathan Goldstein and John Francis Daley, who previously directed 2015’s Vacation and 2018’s Game Night. This duo also has a strong background as writers, having written Horrible Bosses, The Incredible Burt Wonderstone, Cloudy with a Chance of Meatballs 2, Vacation, and Spider-Man: Homecoming. With this lineup, it seems likely that Dungeons and Dragons will likely have a comedic lean.

Dungeons and Dragons has been in development for a while, with the film at one point being set up with Ansel Elgort starring and Goosebumps director Rob Letterman directing. Dungeons and Dragons was originally planned for a November 2021 release date, but has been pushed to May 27, 2022. It’s also not clear when Gal Gadot was originally offered to be involved with this project.

Gal Gadot’s turning down Dungeons and Dragons might just be due to an already packed schedule. The actress has already completed Death on the Nile, Red Notice, and extra filming for Zack Snyder’s Justice League. In addition to these finished projects, Gadot is supposedly working on Cleopatra with Wonder Woman director Patty Jenkins, the biographical film Irena Sendler, and the spy thriller Heart of Stone. This is also in addition to further Wonder Woman projects, including Wonder Woman 3 and the announced Justice League Part Two.

But we’ve likely seen the last of Chris Pine and Gal Gadot together in the Wonder Woman franchise, and it doesn’t look like the two are going to be in any other projects together any time soon. But Pine also has an impressive upcoming schedule, having already finished shooting the action-thriller Violence of Action, which is currently in post-production. Pine has also recently filmed for Don’t Worry Darling, the second film directed by Olivia Wilde, starring Florence Pugh and Harry Styles, and another thriller, All the Old Knives, with Thandie Newton and Laurence Fishburne.

It’s still not clear who will play alongside Chris Pine in Dungeons and Dragons, or who will play the role that was apparently passed on by Gal Gadot. But as the best Chris, it’s clear that whoever is alongside Pine in this role will be a solid choice. 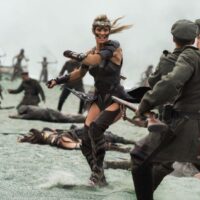