Chris Pratt’s latest film The Tomorrow War is already getting the sequel treatment thanks to an immensely successful debut on Amazon Prime Video.

Deadline exclusively reports that the success of the science-fiction and action film as an international streaming release made Skydance and Amazon Studios rush to get to work greenlighting a sequel. It will bring back the creative team both on and off-camera including director Chris McKay, screenwriter Zach Dean and Chris Pratt’s co-stars Yvonne Strahovski, Betty Gilpin, Sam Richardson, Edwin Hodge along with Oscar winner J.K. Simmons.

The film follows Chris Pratt as a high school teacher with a pretty impressive military background. He and a handful of other top-tier soldiers are tapped for a daring mission to the future, where they learn that an alien invasion all but guarantees the extinction of the human species. The group is in a race against time (literally) to stop the threat and ensure that the loved ones they left behind in the past have a future to wake up to in 30 years.

The outlet reports that Paramount was also involved in discussions for a sequel after it originally picked up the film in the hopes of marketing Chris Pratt’s star power for a theatrical release that was completely waylaid by the coronavirus pandemic last year. Amazon Studios picked it up from Skydance for a streaming exclusive release along with the Eddie Murphy comedy sequel Coming 2 America, which was the most-watched original movie on the platform — until now.

Chris Pratt took to Instagram earlier this week to announce that The Tomorrow War shattered all of Amazon Prime Video’s past streaming records in its first 48 hours of international viewing. As a result, the idea to forge ahead with a sequel is a bit of a no-brainer for the studios and creatives involved.

In his Instagram Post, Chris Pratt recorded a video of himself on the water thanking audiences for checking out his latest action movie while also encouraging his American fans to celebrate the Fourth of July holiday.

People reports that Screen Engine’s PostVOD audience summary backs up Chris Pratt’s claims in his video that The Tomorrow War shattered both records and expectations for Amazon. The film reportedly ranks as the biggest live-action streaming movie of the summer, starting its reporting for the numbers in May.

In addition to breaking streaming records, Deadline also notes that Amazon Prime Video users have gone out of their way to respond positively to the Chris Pratt-led flick, with roughly 20,55K users giving the film an impressive 4.5 out of 5 stars. While anything less than a perfect 5 stars rating may sound weak, the outlet notes that a perfect rating is unheard of on Amazon Prime Video and that the 4.5 marks The Tomorrow War as one of the most positively reviewed new films on the platform.

The latest movie to star Chris Pratt as some kind of soldier can also boast of having immense international appeal, a highly coveted accolade in the world of streaming. Viewership numbers in Brazil, India, France, Italy, Spain, Germany, Australia, Mexico, Argentina, and Japan were all through the roof for The Tomorrow War.

The only question now is how Chris Pratt and his loveable band of heroes will be placed back into the fold for a sequel.

See Chris Pratt Eating A Bug To Celebrate His Birthday 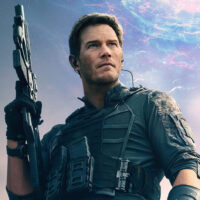