Charlie Cox’s Future As Daredevil Confirmed by Marvel Boss, But There’s A Catch

When the Marvel Universe of Netflix characters were no longer on the streamer, it left fans wondering what would happen to this stable of characters as they moved into the Marvel Cinematic Universe. Would Charlie Cox and others make their way over to the new studio or would each character be recast in this different set of stories? While there hadn’t been overlap in strict continuity between the universes, there was seemingly nothing stopping Cox and company from continuing on in their parts. Well, now it looks like we are getting some answers about Charlie Cox in the MCU and the future of Daredevil as well.

Marvel boss Kevin Feige sat down with the good folks over at CinemaBlend to talk about the future of the franchise on a high level and what would happen with specific characters. Charlie Cox as Daredevil came up and in some ways, Feige doesn’t mix words here. It sure looks like Cox is going to definitely take on the role in the MCU though there is just a little catch. Feige said, “If you were to see Daredevil in upcoming things, Charlie Cox, yes, would be the actor playing Daredevil. Where we see that, how we see that, when we see that, remains to be seen.”

So there you have it, sort of. The good news is that the casting seems pretty darn clear at this point. Charlie Cox will reprise the Matt Murdock/ Daredevil role he held for multiple seasons of the series and in that Netflix world. But Feige does stop short of saying when that will happen. He isn’t definitive about the first/ next time we will see Cox as Murdock. There has been intense speculation about when that will happen in the Marvel Cinematic Universe. It could end up happening sooner than later.

There have been ongoing rumors that Charlie Cox will make his Marvel debut in Spider-Man: No Way Home. While not confirmed, there were supposedly set photo leaks and other working and filming timing rumors that put Cox in that production. Some thought it could come in the form of his lawyer alter-ego Murdock who might be tasked with helping Peter Parker out of the mess he finds himself in after the events of Far From Home.

And that wasn’t all on the Charlie Cox rumor front. Some thought he could make an appearance at some point in the currently-running Disney+ series Hawkeye. A number of different things have pointed to this story overlapping with the Daredevil world. The introduction of Echo, the adopted daughter of Wilson Fisk/ Kingpin was one piece. These characters, especially the latter, have been key players in Daredevil stories with Vincent d’Onofrio’s Fisk the primary antagonist in the Netflix series. Plus, that series is going down in New York City also, where we know Murdock lives.

Finally, there have been rumors that Charlie Cox will reprise his Daredevil role in the upcoming She-Hulk series. This one will also take place in New York City and is setting up to be a legal series at the heart of it. Tatiana Maslany’s Jessica Walters is also a lawyer and these two characters could meet each other in a courtroom setting. This is all to say, there are a lot of options for Charlie Cox to show up as Daredevil. And it looks like it is definitely going to happen. We just don’t know exactly when. On that front, Kevin Feige played more than a little coy. Though it’s clear he knows when it will happen, he just isn’t letting on. 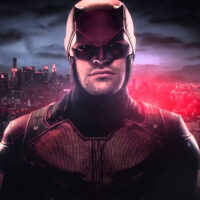