The Babylon 5 reboot could die on the vine, according to series creator J. Michael Straczynski, and he's urging fans to let their voices be heard.

In sadly what isn’t particularly surprising news, it looks like The CW‘s Babylon 5 reboot may be in trouble. J. Michael Straczynski–creator of both the original science fiction series and the potential reboot–took to Twitter this week to tell fans the decision to greenlight or cancel the pilot “may be decided end of this month,” and urged fans to let their voices be heard. In particular, Straczynski called on fans to petition Warner Bros TV, even though 75% ownership of The CW was acquired by Nexstar Media Group.

Straczynski offered fans the hashtag #B5onCWin23 for the campaign, and while so far the supporters of the Babylon 5 reboot getting vocal on Twitter measure at least in the thousands, those aren’t exactly stunning numbers in the age of social media.

One hurdle Straczynski & co. have to deal with that similar revivals are usually spared is that the Babylon 5 reboot simply can’t give fans what they want in their heart of nerd hearts: not a reboot, but a continuation. With the vast majority of the original series’ lead cast having passed away in the intervening years, a continuation may be possible but not at all plausible. Not to mention that Straczynski has already confirmed that his plan with the reboot is to tell a story that’s different from the first series, and change isn’t exactly something hardcore sci-fi TV/movie fans are known for embracing.

In spite of the recent upheaval at The CW–including many of its most popular programs either being cancelled or renewed for final seasons, as well as Nexstar talking about a hard turn away from most scripted programming–this is Straczynski’s first public expression of any kind of doubt about the Babylon 5 reboot’s future. Even earlier this month, when clarifying some fan confusion about different projects from the franchise, the series creator merely said the reboot was “awaiting a production order.” Considering both The CW’s expected turn away from scripted shows and the budget required for an effects heavy, space-based science fiction series, the only surprise is that it’s taken this long for Straczynski to rally the troops.

One silver lining is that regardless of what happens with the Babylon 5 reboot, there is at least oneconfirmed project–which Straczynski called “Project 2”–coming from what remains of the original cast. Straczynski confirmed the new project–scheduled for release in 2023–in early September, but without saying exactly what Project 2 was. He said only that it was done “in secret” and that he’d been “sworn to secrecy” against even mentioning what medium it was taking place in.

We don’t have any inside scoops on what Project 2 is, but at the very least we can make some good guesses about who is involved. With so few of the original Babylon 5 stars left, we’re guessing Project 2 will include Bruce Boxleitner (Captain John Sheridan), Claudia Christian (Lt. Commander Susan Ivanova), Andrea Thompson (the psychic Talia Winters), Bill Mumy (the Minbari diplomatic aide Lennier), Tracy Scroggins (Captain Elizabeth Lochley), Jason Carter (Marcus Cole), Patricia Tallman (the psychic Lyta Alexander), and Peter Jurasik (the Centauri diplomat Londo). 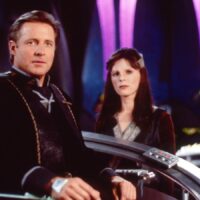