So far, the most well-known role Lily James has taken on was as Cinderella for the live-action Disney movie. Many remember her from her part as Debora in Baby Driver, where she played a soft-spoken and sweet waitress. From those roles, it may be difficult to picture the actress as Pam Anderson for Hulu’s upcoming Pam & Tommy mini-series. Now, we have some first-look pictures of the actress, and honestly, it’s difficult to see James and not Anderson when you’re looking at them.

Take a look at Lily James as Pam Anderson in the classic red Baywatch suit below.

Somehow, that’s Lily James. Her transformation into Pam Anderson for the role is truly impressive. The hair is spot on, her lips are completely different, and you have to really squint to make sure that’s not actually Anderson you’re looking at. However, her hair is a little in her face here. If we saw more pictures, would she still look so much like Anderson? Let’s take a look at two more photos where the actress has taken on Anderson’s classic looks for the show.

In the second photo you’re seeing above, you may notice Sebastian Stan as Tommy Lee. He’s certainly undergone his own transformation to play the character alongside Lily James.

While photos aren’t the same as video, it really looks like Lily James and Sebastian Stan are going to pull off playing the iconic duo. Tommy Lee and Pam Anderson were famously married after knowing each other for 96 hours. In the mid-1990s, you would have been hard-pressed to find a checkout line at the grocery store where the pair wasn’t staring out at you from the cover of a magazine. Their whirlwind romance stole a lot of attention, but was quickly followed up by scandal that took their media attention to new heights.

So what happened? Well, long before Lily James and Sebastian Stan came onto the scene, Pam Anderson and Tommy Lee made headlines with a sex tape they never intended for anyone to see. The pair filmed themselves during their honeymoon. This would have been done using a VHS tape, not digital. That should have been fairly easy to keep private. However, they then hired an electrician and got in a big fight with him. He proceeded to come back around, break into the home of Pam Anderson and Tommy Lee, steal their private tape, and sold copies online for $60 a tape. Anderson filed a lawsuit against the distribution company, before eventually signing a deal with another company and earning money on the tape. While stolen sex tapes weren’t uncommon at the time exactly, they didn’t happen as often as they do today.

It seems safe to assume that the Lily James and Sebastian Stan series will include the events of the tape scandal. The idea for the series came from Seth Rogen and his writing partner Evan Goldberg. Rogen is set to play “Rand” in the series. We can assume this is Rand Gauthier, the electrician who stole the tape. Hulu also posted a first look at Seth Rogen as Rand. The caption mentions that Lily James and Sebastian Stan look a lot cooler than him. He isn’t kidding. Spoiler: he’s beardless, has a mullet, and has embraced questionable fashion trends of the time. Take a look.

We don’t yet have a release date for when we’ll be seeing Lily James and Sebastian Stan in Pam & Tommy on Hulu, but what we’ve seen so far promises a wild ride true to the characters they’re playing. 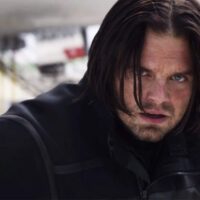