Photo Of Europa Shows Off Bands Of Blood-Red Ice Looking at this picture, what do you see? It resembles human muscle with the skin peeled off, or a close up shot from one of those Bodies exhibits. For a second you might even think it could be one of those balls made entirely of rubber bands, or a golf ball with the hard, dimpled rind removed from the outside. As you probably already knew, it isn’t of those things. This is an image of Jupiter’s moon of Europa, and those creepy looking red strands, the pieces that really do look like muscle, are rivers of blood red ice.

This image of Europa comes courtesy of NASA’s Galileo spacecraft which is exploring that particular region of space. The picture is a combination of “clear-filter grayscale data” from a single orbit (on November 6, 1997) of Jupiter’s satellite and lower resolution color data from another pass (taken in 1998). Those red threads that sprawl out throughout the picture are ice made up of water mixed with hydrated salts, which the scientists and NASA think could possibly be sulfuric acid or magnesium sulfate. They also believe that surface characteristics such as these—the ridges and chaotic surface—could indicate contact with a “global subsurface ocean layer during or after their formation.”

I don’t know what any of that actually means, or what, if any, larger impact it has on our knowledge of the moon, but it certainly is a cool bit of information and a stunning photograph for us to check out for a while. The area pictured here is roughly 101 miles by 103 miles (163 by 167 kilometers), and the images were captured when Galileo was flying 13,237 miles (21,700 km) above the surface of Europa. Discovered by Galileo—the legendary astronomer, not the spacecraft—in 1610, Europa is the sixth closest of Jupiter’s moons, and is slightly smaller in size than our own Moon. Take that, Jupiter. The satellite has one of the smoothest surfaces in the solar system, and also has an atmosphere composed primarily of oxygen.

In 1973 Pioneer 10 began the initial exploration of Europa, with many others to follow, and it has figured into future plans for further examination, due in part to speculation about the presence of extraterrestrial life—you may remember it features prominently in the plot of 2013’s indie science fiction adventure Europa Report. A number of proposed missions have been plotted and planned and theorized, from robotic rovers to manned crafts. 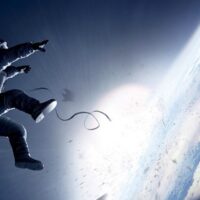