New Horizons Is Awake And Knocking On Pluto’s Door

Let’s see if NASA can keep the positive momentum going. After last week’s successful test flight of the Orion spacecraft, NASA’s next project involves the far reaches of the solar system: the demoted dwarf planet Pluto.

The New Horizons spacecraft has been in a half-awake state for most of its 8-year trip, and it’s been fully hibernating since August 29. Yesterday, it woke itself up at 3:00 pm EST (spacecraft like to sleep in, apparently), and sent a signal back to Earth indicating that it was up, getting dressed, and fixing a balanced breakfast. That signal took four and a half hours to reach Earth, even though it moved at the speed of light. New Horizons is now nearly 3 billion miles away from Earth, and closing in on Pluto as it travels nearly a million miles a day.

While the craft has woken up a number of times in order to check on the status of its various instruments, this time is a little different because it won’t be snoozing again anytime soon. Yesterday marked the beginning of the craft’s “pre-encounter operations,” and its job officially kicks off on January 15.

New Horizons will gather all kinds of information about the former planet, perhaps even settling the debate about whether it’s a dwarf planet or a real planet (or even something else?). Whether Pluto will regain its planetary status may very well depend on what New Horizons finds with regards to its mass. In order to fulfill scientists’ technical definition of a planet, it has to have sufficient mass for its gravity to keep it in a perfectly spherical shape. We know from images that it is indeed spherical (the “perfectly” qualifier isn’t quite clear yet), and measurements from which scientists can calculate the mass will determine how the celestial body is defined.

Pluto remains a mystery. Astronomers first saw it in 1930, but for over 50 years almost nothing else was known about it. Now we know that it’s part of the Kuiper Belt, the area of the Solar System that extends from Neptune’s orbit beyond the planets and contains a bunch of asteroids and other small bodies.

The Voyager I and II spacecraft, both of which have travelled beyond the solar system, didn’t obtain any images of Pluto. Thus far, pictures have been pretty lame, such as the above image captured by the Hubble about 20 years ago. But all that’s about to change. New Horizons has already taken some stunning and unprecedented shots of Pluto and Charon, the largest moon.

Thanks to its high-definition cameras, more will follow. New Horizons also has instruments on board that will examine the chemical composition of the planet’s surface and atmosphere, and gather information about features, interactions with solar winds, and more, including information astronomers can’t even predict yet. The spacecraft is currently still 160 million miles from Pluto, and will reach its closest point, under 8,000 miles from Pluto’s surface, next July. 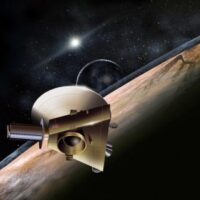 NASA’s Only A Year Away From Pluto 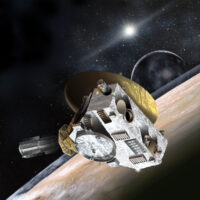 Are You There, Aliens? New Horizons Has A Message For You 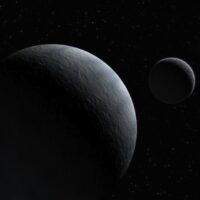