Tesla: Elon Musk Didn’t Found It But This Is How He Grew It

Accelerate the world’s transition to sustainable energy. This is the slogan Tesla lives by. Tesla, Inc., a change from its former title of Tesla Motors, Inc., is best known as an American automotive company, specializing in the production of all-electric vehicles. But the removal of “Motors” from their company title coincides with the fact that not only do they build all-electric cars, but they also are tapping into clean energy generation and storage products.

It’s true that Elon Musk is the name and face of Tesla. It’s also true that Musk is thought to be the creator of Tesla, but that is not the case. Before Tesla, Musk, the self-made billionaire, had created PayPal and was well into his SpaceX venture but Tesla was not his brainchild.

Tesla got its start under the direction of Malcom Smith and Martin Eberhard. Together, they brought in Marc Tarpenning along with a few other bright minds and Tesla Motors got its start. But to get really serious as a carmaker, an electric car at that, they needed the funding. Enter Musk. Musk became a major funder for Tesla and soon the bright idea became a reality.

It took a little time, but in 2006 Tesla introduced its first electric car, the Roadster. This was a sports car able to go from 0 to 60 miles per hour in less than 4 seconds. On one full charge, the car could travel 245 miles. It immediately generated interest and at the same time raised eyebrows.

Many remember the attempt GM made with its electric car, the EV-1. GM pumped in over $1 billion trying to master the electric car only to see it fail miserably. In fact, the EV-1 was the main star of the 2006 documentary, “Who Killed The Electric Car”. So, forgive the pubic and critics in general for their hesitation. But where GM went wrong is what Tesla focused its sights on. The battery.

Tesla decided to not use normal lead-acid batteries but instead go with lithium-ion batteries. Tarpenning told the Business Insider, “They get better, on average, around 7% a year. It goes in fits and starts as they roll out new chemistries. They get cheaper and better.” What Tarpenning said holds true.

One of the most critical aspects customers face when looking at the Tesla is how far they can go. So, while Tesla’s first model was able to get 245 miles per charge, new models come in at 370 miles per charge. This is a nice jump which makes customers much happier.

But Tesla doesn’t want to stop there. A normal lifespan on a battery pack sees about 300,000-500,000 miles. With Tesla having their sights set on not only their electric cars but long-haul electric trucks, Musk feels the lifespan the batteries hold now won’t be enough. He is looking for batteries that will give Tesla vehicles 1 million miles, a number Tesla believes it will see in the not to distant future.

There is but one way to purchase a Tesla. Online on the Tesla website. So many buyers out there are not a fan of the normal car-buying experience. They do not care for car lots nor the salesmen who occupy said lots. They don’t appreciate the aggressive nature nor the hassle one may experience when trying to nail down the car of their dreams. Tesla has made the car buying experience stress free.

The Tesla website showcases the five models: the Model S, Model 3, Model X, Model Y, and the Roadster. Once you’ve chosen your model, the options feature is next. Tesla offers three different packages when it comes to range. Standard range plus, Long Range, or Performance. Naturally, with these three choices, the price of the car will vary, as will how far one can go on a single charge. You can next choose the color of your vehicle and wheel type.

The interior of the car comes next and what a different look Tesla gives. No longer do you have a set-up with all your controls crammed into a tiny display right in front of you. Tesla has done away with those and now offers a huge touchscreen that controls everything. Located where a normal car’s stereo would be, the screen size varies by model. Teslas comes with either a 15” or 17” touchscreen which allows you to control almost every aspect of the car.

A touchscreen interior isn’t the only innovative feature Tesla employs. An all-glass panoramic roof with solarized tinting is a staple Tesla has included in their designs. An amazing sound system is included as well and, in some configurations, (Model X, Model S) they can seat up to 7 passengers.

A Car That Drives Itself Into The Future

For many Teslas biggest selling point is autopilot. Autopilot is a feature that allows your car to steer, accelerate and brake automatically within the lane it’s driving. It also allows you to retrieve your car with a push of a button. This means with your car in the garage, you can call your car to come to you. It’s not a perfect system yet, but it’s getting better with every iteration.

Meanwhile, for those who have issues with parallel parking, Autopilot can sometimes handle this task. Autopilot will also automatically change lanes for you as you’re driving on the highway. All this is done with the assistance of eight cameras and 12 ultrasonic sensors that each Tesla vehicle comes with.

All these features are great you say, but what about charging it? Charging your car at home is as simple as charging a smartphone. Meanwhile across cities, as well as workplaces, more and more charging stations are being implemented. For those who long for a road trip, Tesla has produced a map of the United States which documents their 1,636 Supercharger Stations that carry close to 14,500 Superchargers, with more stations to come. Tesla is making it as easy as possible to keep your vehicle charged and ready to hit the highway.

The Future Of Tesla

Where does the future of Tesla lie? Is the electric car here to stay? The answer may not be an easy one. The company prides itself not only on the cars they produce but their ability to look toward the future. Theirs isn’t a “now” vision but a vision that will take us years down the road. So not only does Tesla produce electric cars, they are looking at electric long-haul vehicles and robotaxis.

Their real focus focusing has always been on battery production. Elon Musk has brought in one of the world’s foremost lithium-ion researchers, physicist Jeff Dahn, to help with this task. The results so far are positive with their ultimate goal of producing a battery that will last the million miles Musk seeks.

On a smaller scale, Tesla is always adding new features. Recently they added the ability to things like Karaoke in the car, in addition to fun things like video games and silly tricks like the fart machine they added last year.

Now they’re apparently working on turning Teslas into talking cars. Not like Alexa, more like Knight Rider’s K.I.T.T. In the future your Tesla will not only talk to you, but also people outside the car.

Elon Musk demoed the new, yet to be released to the public, talking car feature on Twitter. Watch a Tesla engage with passersby in a British accent that sounds a lot like K.I.T.T….

The Problem With Tesla

With all the positives, there are the negatives. Elon Musk definitely has his distractors. He is hated as much as he is loved, and perhaps with good reason. Sales. Per Wired, Tesla lost $408 million in its second quarter. While that number is huge, it actually represents a gain as its first-quarter loss came in at a staggering $702 million.

Still, the actual sales figures have risen as Tesla reported a record 95,356 vehicle delivery number, up 134% from their previous set record of 90,966. Revenue-wise, Tesla saw $6.35 billion but this represented an 8% loss. To the delight of some, many analysts feel Tesla may be overvalued and have a concern about this decline.

Perhaps this negativity is turning a corner. One of Tesla’s harshest critics had predicted bankruptcy for the company but has since changed his mind. He notes the attention to detail and the characteristics of Tesla’s new vehicles are a major positive. The company’s re-focus on battery production and the creation of gigafactories to make them has also received high marks.

Elon Musk’s Vision For The Future

Elon Musk, himself, seems to differ with analysts in his view of the company’s future. He feels the future of his company will be determined by the Model 3 and Model Y. As lower cost options, he sees their numbers jumping dramatically from the Model S and Model X. As the newer models become more affordable, the numbers should only go up. Musk also feels with the recent introduction of their Cybertruck and the planned semi-truck, Tesla’s popularity and financial stability should be on solid ground.

In the end none of that may matter. Tesla’s survival could end up hinging on the recent $50 billion merger between Peugeot owner PSA Group and Fiat Chrysler. This merger has created an extremely fierce competitor, the now fourth-largest automaker worldwide by sales. Because the auto industry is becoming more and more focused on being environmentally right, this merger happened with its sights sest directly set on the electric-car market. It could be competition Tesla may find hard to deal with.

Only time is going to tell Tesla’s fate. Musk seems to be positioning Tesla for the future by developing a better battery and in the long run, that may be what keeps the company going. 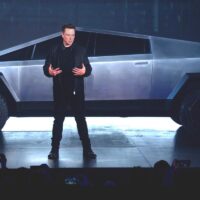 Elon Musk: The Man Behind The Headlines

Cybertruck: All About Tesla’s Electric Pickup 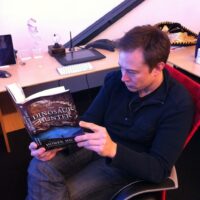 Elon Musk: The Books That Most Influenced His Life

The SpaceX Starship: All We Know About Elon Musk’s Spacecraft