Hilton Hotels Are Going Into Space

Hilton Hotels has signed a series of deals to put the first hotel in space on a new space station going live in 2027.

TV shows like Star Trek and The Expanse have shown us a world where traveling to another planet is as easy as packing up the kids and taking a weekend road trip. Hilton Hotels are making the first move toward bringing this science fiction concept to reality, as reported by Supercluster. The massive hotel chain inked a deal with Voyager Space and Lockheed-Martin in October that would put Hilton in space.

The deal connects Hilton to the satellite Starlab, which is currently being built by Voyager Space and its parent company, Nanoracks. The space station is due for launch in 2027, and the deal puts hospitality suites and other lodgings on the station. The agreement is the first of its kind between a hospitality company and the space sector.

The Hilton company’s dream to put a hotel in space dates back to the Space Race of the 1960s. At the time, Barron Hilton, son of founder Conrad Hilton, had big plans for an orbital hotel and a lunar hotel, which he announced in a presentation at 1967’s American Astronomical Society Conference. He outlined detailed plans for his off-planet hotels, including a resort on the Moon that would have a common area with a view of the Earth and an underground design to mitigate the wildly fluctuating temperatures on the lunar surface.

Barron Hilton was not merely a dreamer when it came to space, though. He was an aviation enthusiast who could fly a number of aircraft, and in the 1960s, he believed space to be the next frontier. He consulted on his hotel plans with Don Douglas of the McDonnell Douglas aircraft manufacturing company and borrowed students from Cornell University to do a study to see if the feat could be accomplished.

The dream Barron Hilton had about putting hotels into space resonated strongly with a country that was excited about astronauts and rockets. A nod was given to a fictional extraterrestrial Hilton location in space in 2001: A Space Odyssey, and news cycles dominated by the Moon landing in 1969 included another presentation given by the Hilton heir that further emphasized his belief that space was humankind’s next step. People all over the country began reserving spots in hotels that hadn’t even been built yet, so exciting was the prospect of vacationing in space.

These ideas were not just speculations, however, but proposals that were very prescient even if they were premature. It was the first serious consideration of off-planet tourism, a dream of every kid who ever wanted to be an astronaut, and it laid the groundwork for October’s deal between Hilton and Voyager Space. New innovations in technology will probably provide an upgrade to Barron Hilton’s plans – which included a nuclear-operated, fully mechanical kitchen – but the long history of the hotel chain’s interest in off-planet tourism has finally paid off.

The station that will include the Hilton lodgings will not be space-worthy until at least 2027, and is one of three that are operating under NASA grants. However, they are private companies, so the hotel chain will have a lot more breadth than it would have during Barron Hilton’s time. Vacationing in space was once the purview of science fiction, but it looks like it’s becoming an exciting reality. 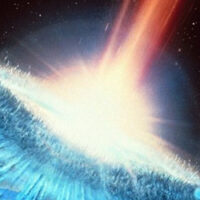