You know that thing that you believe is the coolest thing ever? Well, I hate to break it to you, but you’re wrong, because this set of prints for the Garbage Flesh Eaters, a clear zombified spoof of the Topps Company’s Garbage Pail Kids trading card series, is a thing that exists. Of course, the Kids were themselves created as a spoof of the Cabbage Patch Kids dolls that took over children’s lives in the early 1980s. So maybe a few years from now, someone will be spoofing these cards, but we’ll hold off on that until it gets here. For now, let’s enjoy the gory zombie bliss.

These five limited-edition prints (and the accompanying stickers) were created by artist Omar Hauksson for the Nakatomi Inc. website, where they will be sold for $25 a pop, which includes one sticker, or $100 for the set, which includes all five stickers. There are only 50 of each print, which measures out to 9″ x 12″ of colorfully disgusting reverence. All you have to do is go here between 1 p.m. and 2 p.m. on Tuesday, October 22nd. It erroneously says October 15th on the link, but don’t bother with that. And don’t be late!

So we’ve talked about these prints enough without talking about what’s actually on them. Zombie godfather George Romero gets two nods here, one for the Night of the Living Dead-inspired image seen above, and then there’s the lovingly illustrated “Gored George,” which depicts Day of the Dead‘s horrifying Dr. Tongue, whose absence of a mandible created one of the freakiest creatures to ever come from a zombie flick. You might not have to worry about him gnawing on your neck, but he’s certainly going to get a lot of bloody slobber all over it. Next up is the ghoulishly beloved Tarman villain from writer/director Dan “Oily” O’Bannon’s comedy horror masterpiece Return of the Living Dead, which was the film to really start up the whole “zombies eat brains” conceit. Maybe that’s why Tarman is smiling here, because he’s a true originator of classy acts. One of the most realistic depictions of an actual member of the walking dead, the rotted, bug-infested beast from Lucio “Flesh Eating” Fulci’s Zombi 2/I> is so goddamned nasty you won’t even realize that there isn’t an original Zombi movie, as that was the Italian title given to Romero’s Dawn of the Dead. But Fulci’s cult classic definitely stands on its own within the horror genre as a whole, and is probably better than the last few films in Romero’s ongoing zombology. Finally we have the least known member of this troupe, one of the eyeless Templar Knights who make everyone’s lives a living hell in famed Spanish horror director “Antiquated” Amando de Ossorio’s 1971 classic Tombs of the Blind Dead, or The Night of the Blind Terror, depending on what translation you’re reading. These guys were killed by gallows hanging, where birds picked their eyes clean. Then, of course, there was the resurrection and subsequent spooking of a vacationing couple. I need this prints in my life more than I need a brain. Or at least this brain in the bowl in front of me. 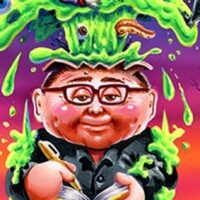