Young Ones Is An Ambitiously Artsy Story Of Survival And Desperation Earlier this year, David Michôd’s post-Western The Rover told a tale of revenge set against gorgeously bare landscapes. Jake Paltrow’s directorial debut, Young Ones, is an outwardly similar drama that trades in suspense-riddled minimalism for something more sweeping and timeless, appearing as if it could have been made at any point in the past 60 years of cinema. Though the artificially intelligent pack-bots would have been a little harder to pull off in John Ford’s days.

An ambitious and unevenly sprawling tale, Young Ones is set in a time when water has become a scarce commodity in the Southwest, and people are forced to adapt to a more primal lifestyle. Ernest Holm, played by the ever-intriguing Michael Shannon, transports supplies to make the money to feed his kids; Mary (Elle Fanning), the emotionally manic one, and Jerome (Kodi Smit-McPhee), the calm, artistic one. Ernest swears the land they’re on is fertile, but he finds no help in irrigating it from the roughneck crew putting a water pipeline together.

Then there’s Flem Lever (Nicholas Hoult), the always-stubbled, motorcycle-riding, apple of Mary’s eye. He isn’t just the bad boy that father’s love to hate, though. He’s got a problem with Ernest concerning the land, and he aims to make good for himself no matter what it takes. There are a scattered few other characters in play here, but the drama comes mainly from the relationship between the three main men. The first real complaint I’ll put out there is that the women in this flick are as empty as Ernest’s well, though the actresses do them the bare amount of justice allowed.

Young Ones definitely isn’t going to please everyone all the time. It’s too weird, too tonally imbalanced, and too inexcusably cinematic. However, those are the very reasons why I dug it so much. There are bits where it’s like Wes Anderson’s post-apocalyptic Wonder Years, with pitch-perfect cinematography paired with an offbeat relationship between a father and his son. But then we shift to Flem’s story—because yes, this movie is told in three parts, with title cards included—and things start to feel like Sam Peckinpah’s version of a 1980s TV miniseries. The plot then takes another turn to focus on Jerome, and it becomes a Quentin Tarantino movie where the characters have nothing witty or perverse to talk about. And it’s all tied together with random science fiction elements to remind viewers that they’re in the future.

The robotic mule is the most fully utilized sci-fi element here. I hate when people say things like, “New York City was a character in this movie,” but I can’t help but think the machine was far more important to the story than either Mary or the Holm matriarch Katherine (Aimee Mullins). Katherine is in a healthcare facility, which is where another chunk of the world’s progressive state is shown, but her character’s purpose is mainly to shed a small bit of light on the emotional states of the various family members. This could have been achieved without her there at all. Still, it’s another lovely idea.

Young Ones is strengthened by a stunningly realized setting, with some of the most gorgeous scenic shots that sci-fi can hope for without CGI falsifying things. Paltrow sprinkles the film with just enough exposition and a decent smattering of “this is what the world is like now” details, from washing dishes with dirt to the lack of authoritative fear in murdering someone. (The unspoken connection between the father and son’s use of hammers to convey anger is also quite interesting.) The direction can get distracting at times, with nearly every camera trick in the book showing up during the film’s 100-minutes, but the story has been trimmed of fat and the actors make the constant dissolves and fades non-existent. Hoult will probably never be able to stand toe-to-toe with Shannon, but most can’t, and he’s good here nonetheless.

With silent white-on-black opening credits and slightly pretentious actors-on-curtains closing credits, Young Ones is definitely a piece of cinema more than it is a piece of storytelling. Paltrow, brother of actress Gwyneth, has only made one film before this, the 2007 comedy The Good Night, but I hope he continues pushing forward in the science fiction path, because the genre could use this kind of a vibe. In the end, Young Ones is a quirky, imaginative, and sporadically dark tale of survival and how bad things can get before they get better. I need a glass of water now. 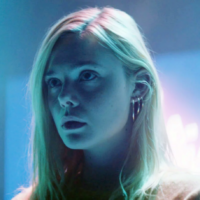