A few weeks ago we brought you the story about hyperactive British inventor Colin Furze, who combined his love of the X-Men with his knack for figuring out how to translate fiction into reality. The result? A truly badass set of retractable Wolverine claws. (No, they don’t retract into his actual arm, but it’s still pretty damn impressive.) Nor did he take the safe path and keep the blades dull — over the course of the video, he demonstrates their sharp edge on some cardboard, a watermelon, and an inflatable Mystique sex doll. Just stuff he had lying around, in other words.

Well, it turns out the Wolverine claws aren’t his only mutant-inspired invention. After all, Marvel’s merry mutants just returned to the big screen with gusto in the epic X-Men: Days of Future Past. So where do you go after “Wolverine claws?” The answer, it seems, is Magneto shoes. Now, Magneto can actually control metal in all sorts of ways, which is pretty hard to replicate I’m guessing. So instead Furze opted for one singularly impressive display of magnetic mastering: walking upside down on the ceiling with magnetic shoes.

Okay, so it might not be as impressive as the real Magneto dropping a sports stadium around the White House…but he’s fictional, so get a grip on yourself and stop nitpicking. Furze’s enthusiasm in his videos is definitely infectious, and the great part is that he also documents the work that goes into his creations, not just the final reveal. Here’s what went into making the Magneto shoes, and getting the hang of walking on the ceiling. (I hear he consulted Lionel Richie.)

Well, Professor X’s telepathy is going to be a tough nut to crack, so for his next project Furze decided to emulate the powers of one of the X-Men universe’s lesser mutants: the frequently villainous flame controller Pyro. Unlike, say, the Fantastic Four’s Johnny Storm, Pyro can’t actually generate flame on his own — he can only control it once it’s already there. So he relies on a pair of flamethrower nozzles mounted on his gloves. A bit of hard work and clever tinkering later, he’s shooting 12-foot jets of flames out of (the vicinity of) his hands.

Yeesh. That one really is all about the hand positioning, isn’t it? I can see this one going horribly wrong, even for a homemade flamethrower. At least get some protective gloves, man. Maybe ask the Rocketeer what he uses for his pants.

He also includes a do-it-yourself video about the making of the Pyro rig. I’m gonna go ahead and say that GFR does not endorse doing it yourself. Like, at all. 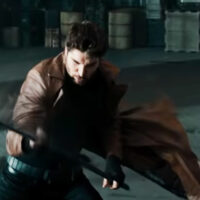