X-Men: Apocalypse Is Looking At Tom Hardy For This Major Role All the current superhero casting hype lately has revolved around who is going to play Doctor Strange in director Scott Derrickson’s upcoming version of the character for Marvel. And that’s justified, fans have been clamoring to see Stephen Strange onscreen for years. Damn near every actor in Hollywood has been rumored in connection with the part (I feel like eventually I’m going to be linked to the role), but buried under all these reports and speculation, there’s another interesting superhero casting rumor. Fox reportedly wants Tom Hardy could play a villain in the next X-Men movie.

Continuing down their timeline-tweaking, not-quite-a-reboot path that started with X-Men: First Class and picked up this summer with X-Men: Days of Future Past, X-Men: Apocalypse is up next. According to reports, the studio is after Hardy to play the role of the titular villain in the Bryan Singer-directed mutant adventure. Right now he’s being “courted,” and what that means remains to be seen—he could be in talks, or maybe he’s just at the top of the wishlist, we don’t really know. Apocalypse, also known as En Sabah Nur, shows up at the end of Days of Future Past as that Egyptian fellow building pyramids and throwing around giant bricks in the post credits scene. He’s often called “The First One,” and may, in fact, be the first mutant. And, as indicated by his first cinematic appearance, he’s been around for a long while, wreaking all kinds of havoc. You expect as much from a dude named Apocalypse.

On the heels of Locke and The Drop, the next Hardy project we’re really excited for is, of course, Mad Max: Fury Road, where he takes over the role that helped make Mel Gibson a global superstar in George Miller’s return to the post-apocalyptic Australian outback. That’s going to be a good time. Hardy is never one to take boring roles, and this one could be a lot of fun. It wouldn’t be the first time he plays a big comic book villain either. As you probably remember, he was Bane in Christopher Nolan’s The Dark Knight Rises.

While many people talk a gang of shit on that part, I think he’s fantastic, all the way down to that adorable old man voice he has—I want him to read me bedtime stories in that voice. And in that role, as well as movies like Warrior, and, presumably, Fury Road, he certainly has the physicality to pull off a character like Apocalypse, and you know he would be totally awesome. What is unclear at this point is if he even has even the slightest interest in playing another big comic book baddie.

X-Men: Apocalypse is scheduled for a May 27, 2016 release slot, and we’ll just have to wait and see if that includes Tom Hardy. Hell, maybe he could even bring his Riders of the Storm along for the adventure. 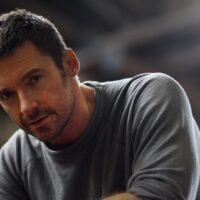 One Of Hugh Jackman’s Best Movies Just Released On Streaming