At the moment, I’m looking forward to watching movies like Elysium, S-VHS, and World War Z, among others, but I’m fucking frothing at the mouth for The World’s End, the third and final installment of Edgar Wright, Simon Pegg, and Nick Frost’s Blood and Ice Cream trilogy, behind the superb Shaun of the Dead and Hot Fuzz. My jubilance for this flick rivals how I used to wait for Jay and Silent Bob appearances as a bong-hugging 20-year-old, which is very different from how I am now, at 30, not caring about Jay and Silent Bob anymore. But I’ll probably break the bong out when The World’s End is released in October. Since it’s a movie about drinking, maybe it should be a beer bong, with whiskey in it.

Details about the plot have not been very forthcoming, with little known beyond it involving a group of friends recreating a past pub crawl, which then builds up to some apocalyptic event. Edgar Wright recently sat down with IGN to discuss the film’s comparative inclusion into the trilogy, and the themes guiding the story. Unfortunately, absolutely no sci-fi aspects of the film come up, but Wright does mention Pegg’s look recalling his goth days as a Sisters of Mercy fan. So there’s that.

Here, he talks about how The World’s End works as the third film in a series, and what viewers can take form them altogether.

We have tried to make them like a thematic trilogy. They’re all different stories with different characters but they have thematic similarities that me and Simon are slightly obsessed with. But Shaun was about where we live – our neighbourhood in North London. And then Hot Fuzz was about going back home. Home for me and Simon in terms of a small town. But this one is about looking backwards. It’s more nostalgic. I think a lot about my adolescence and my teenage years and things I’d do differently. I have grand fantasies of going back in time and doing things better. Back to when I was 15 or 16. So there’s an element of that – whether it’s healthy to look or go backwards. That’s kind of what the theme of the film is.

Hopefully they might work like Michael Apted’s 7 Up series. And if you factor Spaced into it as well, you’ll see us getting older. But they have different concerns. I think this one is our way of wrapping up, with some finality, the man-child aspect of the series. There’s an element within all of the movies that’s about growing up. Shaun has to grow up to be a hero. In Hot Fuzz Nick Angel has to dumb down to Danny’s level to save the day. There’s a lot of American comedies in the last 10 years that have been about man children or dealing with responsibility. But I feel that they never get too deep under the surface. They bring up some aspects but don’t delve into them very deeply. And I think here we tried to skewer those movies in a sense.

I don’t know. The reason that you do that is so people can enjoy the film more. It’s not that there are major twists. I always feel there are some films that I wish I’d seen cold, so I’d love to try and retain a little bit of mystery. That said it really is what we say it’s about in the synopsis. The synopsis is not a smokescreen. It really is about five friends reuniting to try and recreate their pub crawl. That wasn’t a diversion tactic. That really is what the film’s about. But the film’s eight months from coming out so it’s pointless blowing everything now.

Eight months seems like an eternity from now. I’ll just have to spend my time watching Spaced and Asylum over and over until it gets here. 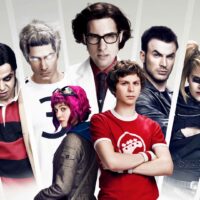 Scott Pilgrim vs. the World: How It Failed And Why It Deserved Better