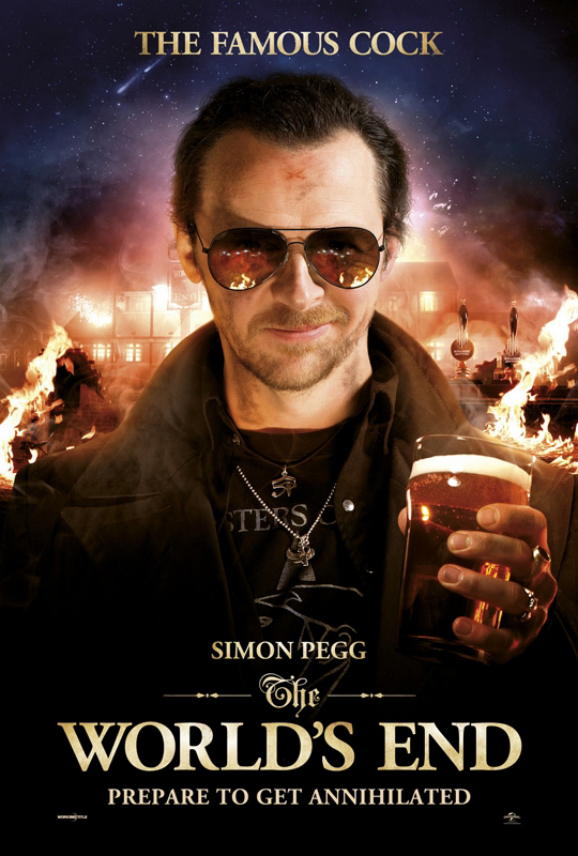 Edgar Wright’s The World’s End is one of the most anticipated movies of the summer. The third and final installment of the Three Flavours Cornetto (Blood and Ice Cream) trilogy is almost nine years in the making, beginning with the release of the zombie comedy Shaun of the Dead in 2004. Universal recently released a set of new character posters from the film, featuring the film’s stars and some of the bars they’ll pass through during their epic pub-crawl to The World’s End.

These posters are great, mainly for the fact that a movie poster that will be displayed in movie theaters throughout the country will have the words “The Famous Cock” printed on it. I don’t think it’s a coincidence that Simon Pegg has a smirk on his face on The Famous Cock poster. These new posters are also a play on The World’s End’s first teaser poster, which featured all of the names of the bars on “the golden mile” pub-crawl.

The World’s End follows Gary King (Simon Pegg), a 40-year-old man who refuses to grow up. He assembles his childhood friends to re-live their glory days and re-create the epic pub-crawl of their youth, but little do they know that the fate of the world is in their hands. It seems as if their hometown has been invaded by glowing blue-eyed killer robots that plan to destroy all of humanity. The World’s End will also feature Martin Freeman, Rosamund Pike, Eddie Marsan, David Bradley, and Paddy Considine.

Each film in the Three Flavours Cornetto trilogy skewered a different genre. The World’s End is science fiction, Shaun of the Dead was horror, and Hot Fuzz took down the action/thriller genre. Simon Pegg and Edgar Wright wrote all three movies, while Edgar Wright directed.

The World’s End will hit theaters in the U.S. on August 23.