One of the biggest surprises of the summer was how well World War Z performed at the box office. Since its release this past June, the zombie movie took in $473.4 million worldwide with $193 million of that coming from domestic theaters. Before its release, many box office analysts and movie pundits believed that World War Z would die a horrible death because of negative buzz surrounding the film’s rocky production. Brad Pitt and director Marc Forster pulled it off with a script re-write from Damon Lindelof and Drew Goddard and a late scheduled seven weeks of re-shoots. Paramount Pictures wants to capitalize on the film’s success, so the movie studio is planning to re-release World War Z in IMAX theaters for a special limited one-week engagement.

According to Deadline, this Friday August 2nd, World War Z will invade IMAX theaters across the country in a special re-release. Paramount Pictures digitally re-mastered World War Z in the IMAX format to play in selected IMAX theaters. If you were a fan of the film, it would probably be a good idea to watch the film again in IMAX before the week is over. Once World War Z is released on home video with a Blu-ray/DVD release, there won’t be another opportunity to watch the zombie movie again on the big screen.

Since it’s release this past June, World War Z has been getting mixed reviews from film critics, but overwhelmingly positive reviews from general audiences. The zombie film based on author Max Brooks’ best-selling novel has found a new audience, which led the book’s publisher Random House to release a new unabridged version of the World War Z audiobook with an all-star cast from geek culture including Simon Pegg, Nathan Fillion, Bruce Boxleitner, and Jeri Ryan.

The final version of World War Z was even different from the film’s screenplay. The last third and final act of World War Z was changed at the last minute with a new re-write from Damon Lindelof and Drew Goddard. The point in the film where it detoured from the original was when Brad Pitt’s character Gerry Lane got on an Israeli airliner with an Israeli soldier named Segen, played by Daniella Kertesz. Everything past that point was all-new material from Lindelof and Goddard. The film’s original ending was considerably more bleak with Gerry Lane being sold into the Russian military and his wife Karin (Mireille Enos) exchanging sex with a U.S. Navy SEAL (Matthew Fox) for protection in a refugee camp. Yeah, good job with the happy ending!

World War Z will be released on Blu-ray/DVD on September 13th, but if you want to watch the film again, or for the first time, take advantage of its new re-mastered IMAX re-release in selected IMAX theaters beginning on August 2nd. The limited run is only for one week, before it leaves theaters again. 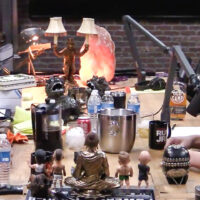 The Most Popular Podcasts In The World