From 1982-1986, William Shatner traded in his Starfleet insignia for another kind of badge: that of an “LCPD” police officer. As the titular star of T.J. Hooker, Shatner patrolled the mean streets and was mentor to rookie agents like Officers Vince Romano (Adrian Zmed) and Stacy Sheridan (a young Heather Locklear). Shatner will connect with novice policer officers on the small screen once again as a guest star on Rookie Blue, a Canadian-produced television series that some reviewers have referred to as a law enforcement version of Grey’s Anatomy. Instead of being bound by a badge, though, this time Shatner will be .

When Rookie Blue returns for its third season on ABC on May 24, Shatner will guest star in the season opener as a “very drunk driver” who causes a multi-car collision and is not a fan of the men and women in blue. Executive producer Tassie Cameron said that the part “starts comic and ends dramatic,” giving Shatner the opportunity to showcase his “great range.”  Understandably, a lot of the cast and crew were excited about the opportunity to work with the film and television icon.  Gregory Smith (of Everwood fame), Cameron said, was more excited about working with Shatner than for any actor he’d ever worked with.

Shatner’s appearance, in and of itself, is actually old news. But TVLine now has a few photos of Shatner from early in the episode. The photos show his character getting roughed up a little and arrested after the offending car accident, and one even seems to show him getting ready to throw a punch at Gregory Smith’s Officer Dov Epstein… 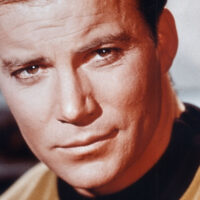