Westworld Coming To HBO Thanks To Bad Robot And Jonathan Nolan While brother Christopher is off making the original film Interstellar, Jonathan Nolan is hopping on the remake train, and he’s headed down to Westworld. And he’ll be meeting up with J.J. Abrams’ Bad Robot, producer Jerry Weintraub, Warner Bros. TV, and the granddaddy of all cable stations, HBO. Because yes, this is a TV show port, not a cinematic adaptation. Is this good news to everyone? I’m not sure how I feel about it.

I understand that it makes sense for books to be adapted into TV series, because a feature’s length may not be enough to tell a story respectfully. But I don’t understand the process of stretching a film into an entire series. Then again, I’d be hard-pressed to find a more powerful team of creative forces to get behind this.

It’s one of HBO’s biggest commitments ever, and they’ve granted Westworld a pilot production commitment, making it the first cable project that Bad Robot has gotten involved in. The pilot script was written by Lisa Joy, who wrote episodes of Burn Notice and Pushing DaisiesDark Knight trilogy and Interstellar. He’ll also serve as director. Weintraub, who produced the Oceans trilogy and Behind the Candelabra, will be executive producing with Nolan, J.J. Abrams, and Bryan Burk. I’m thinking this pilot would have to be a complete disaster to not make it to series.

The description given for this redo is extremely skimpy, as it’s called “a dark odyssey about the dawn of artificial consciousness and the future of sin.” It’s a provocative logline, sure. The future of sin sounds delectable. But its metaphorical approach doesn’t exactly sound like the 1973 film.

The feature directorial debut of author Michael Crichton, who also wrote it, the original Westworld was about a badass robot who goes techno-nuts at a futuristic amusement park, where the guests are free to “kill” or “sexify” the lifelike androids that serve as park attractions. One robotic gunslinger (Yul Brenner) makes life difficult for Richard Benjamin and James Brolin, and we’re left worrying about what would happen if our current technologies turned against us. “My PlayStation just laced my coffee with arsenic!”

There was a disappointing sequel, Futureworld and a short-lived TV series, Beyond Westworld, but there’s no telling just how far into the canon Nolan will take it. And since it’s HBO, that means they need about 50 more characters, half of whom will be willing to take off their clothes.

You can pick up the pretty excellent Westworld Blu-ray if you want to relive this film, since it’ll probably be a while before we can catch this pilot. Will you guys be watching if and when it airs? 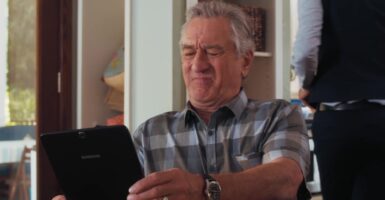