Wally Pfister’s Transcendence Gets Gets A New Photo, Poster, And Featurette

Wally Pfister’s upcoming directorial debut, Transcendence is something we’re watching with a great deal of interest and enthusiasm. Not only will it be exciting to see what Christopher Nolan’s longtime cinematographer at the helm of his own ship, so to speak, but it has also put together a fantastic cast, and has an intense, high-concept idea that is sure to activate a few brain cells. All of the pieces are certainly in place for this to be a memorable first feature film. And now we have our first look at the film, in the form of a photo and a quick behind the scenes feature, as well as a teaser poster.

The image shows stars Johnny Depp and Rebecca Hall (Iron Man 3), as well as Pfister himself, working on set. Along with the picture, there is also a short, less than a minute long, featurette. Both come from Chinese website Mtime, and while neither tells you much about the film, you do get a glimpse of what’s going on behind the scenes.

The most interesting bits are the quick looks at various models and layouts of sets that they’ve presumably already built. Examining these visualized miniatures, you get a sense for how big they are, and they certainly give the impression that Transcendence is going to have an epic, sprawling scope. The rest is just Hall talking to Chinese audiences, and clips of various cast and crewmembers talking while music plays.

Not much is known about the plot so far, but the film has garnered comparisons to the likes of 2001: A Space Odyssey and Inception, heady company indeed. Jack Palagan’s script centers around three scientists who want to create a computer by melding a human mind with new technology they’ve developed. When one of the scientists (the one played by Depp) is murdered, assassinated by anti-technology terrorists, the remaining two attempt to upload his consciousness into a supercomputer. The plot involves big, mind-bending ideas like singularity, nano technology, and artificial intelligence.

Like the accompanying photo and video, the teaser poster doesn’t reveal much, if anything, about the film. It does look very sci-fi, with lots of zeroes and ones swirling around. Very ominous, but not particularly informative.

Christopher Nolan and his partner Emma Thomas will produce Transcendence, and beyond Depp and Hall, the cast includes Morgan Freeman, Kate Mara, Cillian Murphy, Paul Bettany, and Cole Hauser. Told you it was impressive. I guess when you film movies like The Dark Knight Rises, you can collect this kind of talent. Whatever treasures and secrets it holds in store for us, the film is scheduled to open April 18, 2014. 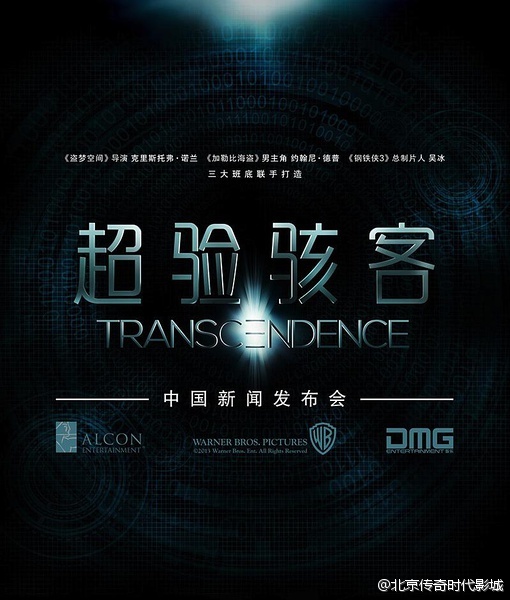